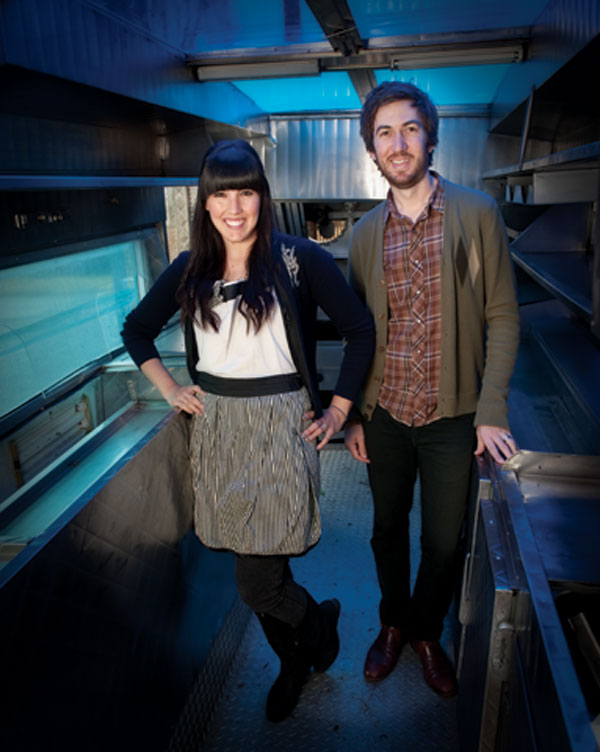 You’ve gorged on tacos, you’ve sucked down a slice of pizza. Now make way for a new contender in town in the high-speed chase toward mobile-food-truck glory. Soon, grilled cheese sandwiches will hit the streets in an all-out power-grab for your lunchtime and nighttime feasting.

“It’s really good bread and really good cheese,” says chef and Grilled Cheeserie owner Crystal De Luna-Bogan of her decision to feature the go-to sandwich of moms everywhere in a starring role on Nashville’s mean streets. “I’d have to be a fool to mess that up.”

But lest you think Bogan, formerly a sous and pastry chef at ChaChah, is being cavalier about the endeavor, her search for the perfect grilled cheese sandwich is well-considered.

“There’s a secret ratio of butter, a secret butter spread I make that crisps the bread perfectly on the grill,” she explains. “And I melt the cheese to the perfect temperature where it’s gooey, but not crunchy. There’s definitely an art to it. You can’t burn the bread, or have the cheese be unmelted.”

It helps that Bogan knows from fromage, and she knows trucking. The Le Cordon Bleu-trained chef was nearly a fromagier in culinary school, and her uncle owns one of the largest truck commissaries in Los Angeles. (She moved here nearly two years ago with her musician husband.) Her uncle’s urging to take her skills mobile, combined with her desire to branch out without all the risk and overhead, led to the idea. But she knew she’d have to really dig her main entrée to commit so totally to it.

“I knew I had to do something I loved to make or I’d get sick of it,” she says. “I love cheese. I’m a baker also, so being able to bake my own bread from scratch eventually is what I’m aiming to do.”

Until then, she’s using bread from Silke’s Old World Breads, the family-owned German bakery in Clarksville, with a gluten-free bread option from Auntie Anne’s Bakery in town. The cheese comes courtesy of Sweetwater Valley Farms in Philadelphia, Tenn. Fromage fetishists, take note: Grilled Cheeserie will offer buttermilk cheddar, smoked cheddar, classic American, provolone, Gruyere, a creamy jack and a brie. In all, she’ll offer six specialty melts on the menu, with a build-your-own option, a soy-based cheese for vegans, and seasonal items as they become available.

Of course, grilled cheeses need the crowning glory of a nice dip in a pool of soup. Bogan plans on featuring variations on tomato-based soups such as old-fashioned tomato cream or vegan-roasted for just that purpose, along with tater tots served with a homemade sauce that’s akin to a spicy ketchup. Toppings will range from plain ol’ tomatoes to caramelized onions and pickled jalapenos, plus the decadent local favorite, Benton’s bacon (which, coincidentally, Bogan enjoyed back in Los Angeles, where she worked in kitchens that had it shipped in specially).

And for dessert? How does a Mexican chocolate pudding sound? Or a vanilla bean with strawberries, particularly when the berries are fresh and in season? Wash it all down with an iced tea, and it’s difficult to imagine a more comforting lunch or late-night snack.

That was the idea, of course. For inspiration, Bogan says she drew from what kids might eat for an after-school snack in the bucolic 1950s (although, at only 26, she admits she’s drawing from depictions).

“It’s a nostalgic treat, but with grown-up flavors in it,” she says. Grown-ups will enjoy the decidedly adult locations: She plans on having the truck up and running in December, with two lunchtime shifts — one for downtown, from Cummins Station to MetroCenter, and a second shift in the Vanderbilt and Belmont area. (Check twitter.com/grlldcheeserie and facebook.com/thegrilledcheeserie for specific details.) At night, they’ll hit a hungry crowd in need of sobering up at shows just letting out, or circle around vibrant bar scenes.

Lucky for us she’ll debut at the height of cold and flu season, when steaming nourishment of the comfort-food variety is hard to come by when you’re out and about. At first, Bogan was unsure if it was too frosty to stir up much business in December, until she considered how much Nashvillians love their comfort food, regardless of season.

“We’re going to have warm food that warms your insides, whether you grab it for your office or grab it and go back in a bar,” she says. “December is going to be a great time for it.”

For a sneak peek, visit the Grilled Cheeserie the weekend after Thanksgiving, where they’ll be set up to serve at East Nashville green boutique The Green Wagon’s “Shop Local” sale Nov. 26 and 27 — they’ll post hours on Facebook and Twitter closer to the weekend. (We hear there’ll be a delicious Thanksgiving-themed grilled cheese of the sort you’d expect to whip up with leftovers from your own kitchen, featuring shredded turkey, cranberry, brie and a mashed-potato aioli.