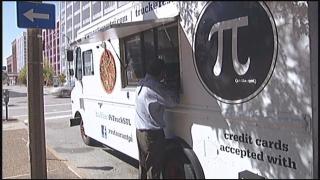 St. Louis, MO (KSDK) — It’s a trend in cities across the U.S. that is finally rolling into St. Louis: high-end food trucks.

Craving a cupcake, or perhaps gourmet pizza? These trucks bring their wares right to the busiest spots. But the jury is still out in some communities as they weigh the impact on brick and mortar businesses.

Call it a cult following. Fans of the Sarah’s Cake Stop truck line up where ever it shows up.

“I think it creates foot traffic,” says owner Jeff Pupillo. “It creates excitement in the cities that we’re in.”

Then there’s Pi Pizza, also with a roving outpost.

Social media sites like Facebook and Twitter tell people where the truck is headed next. You’ll often see it parked downtown. Already popular in other cities, the food truck phenomenon is finally driving into St. Louis. And, as with any growing trend, come growing pains.

Among the biggest challenges for these trucks: finding parking and getting permits. In fact, many municipalities are being forced to rethink how they feel about street vending.

“We thought we had a great plan and then all of a sudden these guys start rolling into town,” says St. Louis Director of Streets Todd Waelterman.

The City of St. Louis has issued temporary permits as a way to test the waters. The question: how food trucks will affect brick and mortar establishments.

“So there’s no long term commitment here. Their permit expires end of the year for now,” says Waelterman. “And we’ll put something together; we’ll put a package together. We’re going to listen to everybody and we’ll come up with a plan.”

And they’d better, because there are more trucks coming; among them Erik Jacobs’ Wanderlust pizza.

“This is not a fad that’s going to go away,” Jacobs says. “I think this is a new way of actually doing business.”

His truck is a 1973 airstream trailer, complete with wood burning oven. The advantage he says is the low overhead and the ability to go where the people are.

“It’s a really fun creative way to do an interesting business, for me as a business owner,” he says. “As a consumer? Yeah, the more the merrier.”

For now, there are just a few of these high end roving restaurants.

“And a couple of us are doing that, which is fine. We’re happy to do that as long as there’s more to follow after,” says Pupillo.

The regulations on food trucks vary from town to town. Some communities like Clayton have decided not to allow them at all.