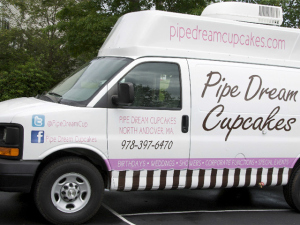 The Board of Selectmen are looking for six people in town, ranging from eatery owners to simply residents, in order to help refine the forthcoming regulations for mobile food truck vendors in town.

The board unanimously voted at their meeting on Monday, July 15, to establish a seven-member committee to review and improve the draft regulations for mobile food proposed by the Town Manager’s office.

One of the members would be a selectman, while the six others would be selected from volunteer applicants — preferably from a variety of stakeholders, according to the selectmen.

The town voted to establish regulations for the trucks following an affirmative vote at Town Meeting this spring. Currently, North Andover has about four mobile food trucks operating within town.

Some of the regulations proposed by the draft bylaw includes: establishing a minimum distance trucks must be from a “brick and mortar” restaurant, if a set number of acceptable operating locations should be established for trucks, and what licenses would be mandatory to operate in town.
Businesses speak out

Business owners, residents and selectmen all chimed in during public comment with their views on the rules and the impact mobile trucks would have on the restaurant economy.

Owners of the Good Day Café restaurant, located on High Street, noted their operation requires significant overhead to sustain the paychecks of 15 employees in addition to the town’s own taxes and fees. Co-Owner Kathy Santoro said she’d like the option for stand-alone restaurants to have the right to petition mobile trucks from parking within a certain distance of their business.

“We don’t begrudge anyone for having a business and being successful, but it shouldn’t be at my expense,” she said.

Mike Lorenza, a member of the North Andover Merchants Association, said his organization stands behind the town’s brick and mortar stores ahead of any mobile trucks.

“The business association will support the brick and mortars 100 percent,” he said. “I don’t see ice cream trucks and cupcake trucks sweeping up their sidewalks. There’s some pride there (by restaurants in town).”

Terry Holland, owner of Stachey’s Pizza, said even as a stand-alone restaurant owner he’d like to find ways for businesses of both stripes to survive and thrive in town.

“I don’t see (mobile vendors) as a big problem today but it can be,” he said. “I don’t think rules are made for good people. I think we all have to find a way to survive when we live together.”

Nadine Levin, owner of Pipe Dream Cupcakes, was the only mobile food vendor who spoke that evening in defense of the burgeoning business model. She also explained how the state and local communities often provide conflicting information on what requirements for operation were.

“There’s a lot of questions and misconceptions,” she said in a follow-up interview with the Citizen. “I’m going to educate (the town) on what I’m trying to do and we’re going to try and reach a balance and figure it all out.”

Selectmen similarly commented on the proposal with a variety of views on what sorts of regulations should be imposed upon trucks in town both before and after the meeting.
Tracy Watson, one the most vocal proponents for the regulations, reiterated her dedication to protect North Andover’s “brick and mortar” restaurants while making sure food trucks had the opportunity to find their own niche in town.

“I’m not looking to ban mobile food trucks but I am trying to limit them,” she said. “I stand with my brick and mortar restaurants. They need to know their association is there to protect them and someone in the government is, too.”

Richard Vaillancourt, who noted during the meeting his distaste of limiting mobile food trucks to set locations, said he’d primarily like to see regulations close loopholes for abuse by mobile vendors while still keeping the town open to new investments.

“The baseline rules and regulations were good,” he said. “They just need to be tightened up a little bit. We want to make sure we’re doing right by everybody involved.”

Both Watson and Vaillancourt have served in a leadership capacity with the North Andover Merchants Association.

William Gordon said he’d like to ensure the protection of the brick and mortar shops from having competition directly roll up to their doorstep, especially vendors from out-of-town locations.
“There’s not many of them but as time goes on, and trucks from out of town come in, it’s a good thing to put in place,” he said.

Donald Steward praised how the town was taking the initiative to create mobile vendor rules now.
“We have to find a way to have these things coexist,” he said. “We have to take our time to do this right so everyone is on board with this and everyone is comfortable with this. The last thing you want to do is stifle business in town.”

Chairman Rosemary Smedile said the board would continue to collect applications for the volunteer board until the end of the month.

“I think we’ll be able to come up with something everybody feels comfortable with,” she said. “We have a pretty good draft going.”

The Selectmen collectively agreed, however, the committee would be one of the best ways to reach a consensus on the regulations.

To apply for a position on the committee, or to find further information, email the Town Manager’s office by visiting townofnorthandover.com.