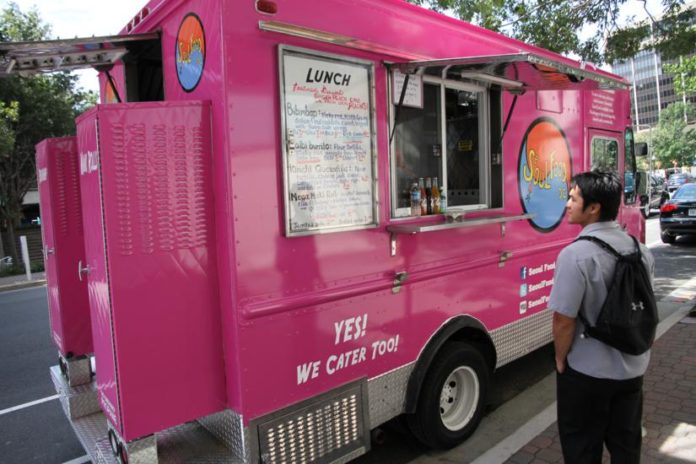 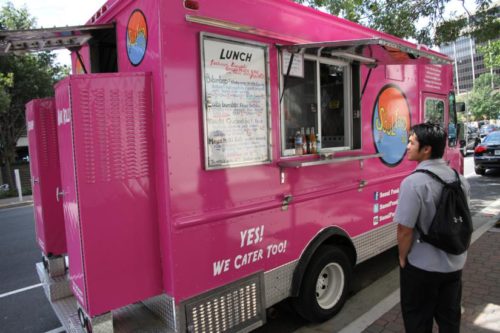 Arlington’s food truck fight has stepped up a notch. Law firms are being recruited to help food truck vendors fight citations for staying in one spot longer than one hour.

At issue is a citation received by Seoul Food for violating the 60 minute rule, which police began enforcing over the summer. As noted in a CATO Institute post last week, the food truck owner told police he had moved to a different spot after one hour, but the ticketing officer didn’t believe the truck had moved far enough from its original position.

The Arlington-based Institute for Justice (901 N. Glebe Road) became involved after some of its workers heard about the legal issues while stopping at a food truck for lunch one day. They thought it fit perfectly into the organization’s National Street Vending Initiative, which aims to foster conditions that allow food trucks to thrive.

“We’ve been fighting on behalf of vendors across the nation and wanted to find a way for them [Seoul Food] to continue earning an honest living,” said Institute for Justice (IJ) attorney Robert Frommer, who also represented Arlington doggy daycare business Wag More Dogs in its unsuccessful fight against Arlington’s sign regulations.

Because it’s a criminal matter, the IJ didn’t take on the case itself, but instead requested assistance from law firms in the D.C. metro area that might be willing to work on the case pro bono. Frommer said a number of firms have come forward to assist Seoul Food, and possibly other vendors that may be in a similar situation.

Besides fighting the citations, the goal is to work with Arlington County to change the 60 minute rule.

“Food trucks give people with big dreams, but not a lot of capital, a chance to work hard and succeed,” said Frommer. “They do that in a way that benefits the community. Arlington County should recognize that and rescind its one hour rule so food trucks can continue to thrive and serve the community.” 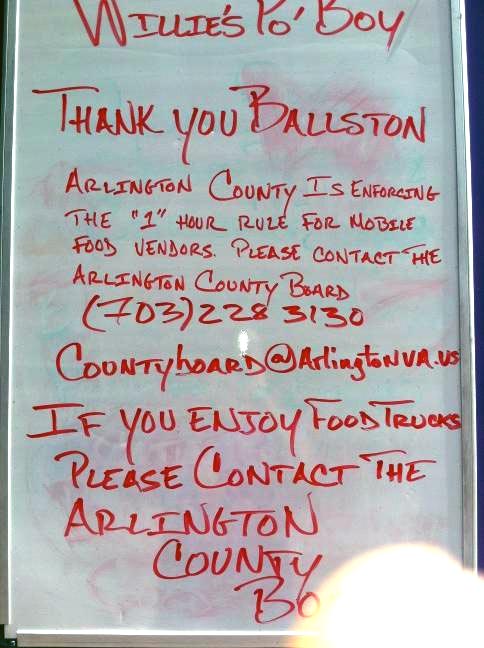 The IJ also believes the penalties for violating the 60 minute rule are too harsh. Per the Arlington County code, “Any person violating any provision of this chapter shall be guilty of a Class 1 misdemeanor.” A Class 1 offense is the most severe of Virginia’s four misdemeanor classifications, and could bring penalties of jail time up to one year and a fine of up to $2,500. Other examples of Class 1 misdemeanors include DUI, assault and battery, possession of marijuana and driving on a suspended license.

County code does not, however, list a specific distance food trucks are required to move after one hour, so it’s up to the interpretation of each officer enforcing the law. According to Arlington County Police spokesman Dustin Sternbeck, officers try to be consistent.

“Based upon how the county code is currently written, our officers use discretion in citing the food truck vendors,” said Sternbeck. “When the officers appear in court, they must be able to articulate a reason why they cited them [the vendors].”

In the Seoul Food case, the vendor claims to have been given three different answers as to how far he was required to move his vehicle. Police say the vendor has been given the appropriate documentation regarding the rules on numerous occasions.

Sternbeck notes that police have been “flooded” with complaints about food trucks, and the officers are merely responding to the complaints. He said officers do not target food truck vendors unless responding to a complaint. A number of brick and mortar restaurants and other businesses consistently call to complain when food trucks are parked in front of their establishments, Sternbeck said.

Sternbeck said that officers spent hours going around and educating the food truck vendors on the rules before enforcement efforts commenced. Currently, vendors are warned on their first offense and ticketed for any incidents after that.

“We have to respond to these complaints and that requires us to sit out there for at least one hour to see that vendors have not moved,” said Sternbeck. “It’s up to the courts once we present the information and facts on it, whether or not they want to proceed with the fine.”

The IJ believes the community will back the efforts to change the 60 minute rule, which could help the initiative gain steam.

“I think the people in Arlington love the food trucks. Every day I go out to lunch I see people lined up. People love choice, they love having the option to decide what they want for lunch,” Frommer said. “When they understand what the 60 minute rule is doing to food trucks, I think they’ll strongly support the reforms we believe the county should adopt.”