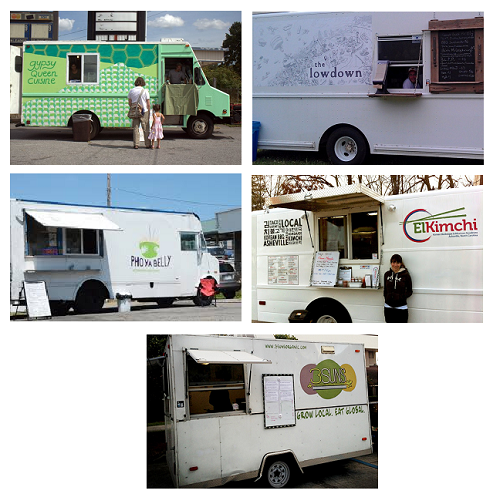 The food-truck invasion continues. Starting today, with more to come on Monday, Sept. 30, downtown workers will have another quick-lunch option: The Masonic Temple will host an array of the local portable vendors in the lot between the temple and Bruisin’ Ales. The new location has been in the works since January, with organizers working through the red tape — meetings with architects, city managers and even a tree service. Apparently organizers were required to add a tree to the sidewalk, according to Suzy Phillips of Gypsy Queen Cuisine.

So after nearly eight months, the permits were finally issued by the city this week.

The Masonic Temple has set aside space for up to two trucks, while allowing for continued paid parking spaces for downtown visitors. A rotation of mobile kitchens will be at the lot Mondays through Fridays for lunch only, so that the Temple can function as usual in the evenings. There will be staples of the food truck scene like Pho Ya Belly, the Lowdown, El Kimchi and Gypsy Queen Cuisine, but there will also be a newbie joining the group with the “world cuisine” of 3 Suns Bistro. According to Phillips, there is still an opening for one truck in the rotation on Tuesdays.

It’s been more than two years since City Council voted to do away with a 25-year ban on mobile food units and allow the culinary entrepreneurs to begin serving within the city limits. The city does require, however, that the permitted vehicles plug into a power source rather than run on gasoline powered generators, which can be noisy. That restriction can be a challenge for the food truck owners, requiring them to partner with local venues having both room for parking and available, accessible power.
Many have chosen to independently partner with bars, breweries and restaurants, but the coalition of trucks has banded together to organize spaces that can host more than one vehicle.

“We’re hoping for all the businesses downtown to come by and check us out,” says Phillips. Here’s the schedule:

Tuesdays: to be determined

Wednesdays: Pho Ya Belly and The Lowdown