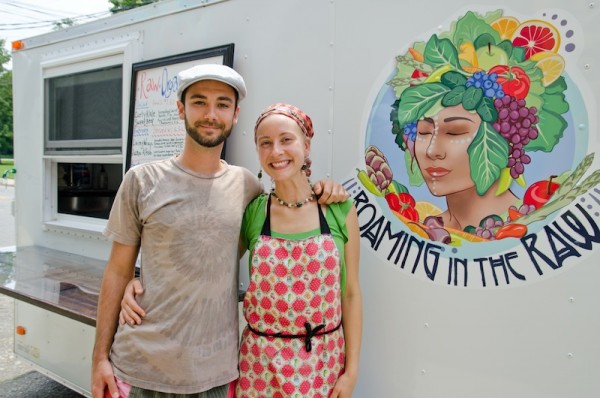 What does guilt free mean? First of all, it means full flavor. The Chocolate Bliss smoothie, a mixture of frozen bananas, cacao, seasalt, dates, almond butter and almond milk, has the richness of its dairy counterpart — without any dairy.

Co-owner and raw chef Jenni Squires uses frozen fruit to achieve a creamy texture. She says thinking about the way food feels in the mouth is just important as the actual flavor. “It’s all about texture,” she says. “I have tons of tools that manipulate whole vegetables into different textures. … That’s why I think what we’re doing is more gourmet raw, things that you’re not going to do on a Wednesday night when you’ve been working.”

Squires and Bier sets up outside of Avenue M on Merrimon Avenue, where Squires also works, Monday through Friday, from 8 a.m. to 2 p.m.

For more information, visit roamingintheraw.com or check out the Wednesday, Sept. 4, issue of Xpress.

What else is happening on the mobile food scene?

• The owners of Little Bee Thai will launch a food truck in the coming weeks. Rick Corcoran and his wife, Took, closed their restaurant in a gas station on Sweeten Creek Road last year.

“Food trucks are hot right now,” Rick says. “Instead of people traveling all around the city to come to us, we can go to their neighborhood once a week.”

Expect to see the truck near French Broad Food Co-op on Fridays. Menu items will include fish curry, Rick says. Xpress will have the full story when the truck hits the street.

• Hi-Wire Brewing recently received a permit to host food trucks. The project is still in its early days, but expect to see Pho Ya Belly and Decrepit Old Geezer’s Sausages adjacent to the taproom for dinner a couple of times a week.

The Brewery recently began screening Champions League and European soccer. Since those games happen across the pond, enthusiasts have to get up early to watch the action live. For those dedicated fans, Hi-Wire will open in the morning, and Taste & See will serve breakfast and coffee.

For a complete schedule of Hi-Wire food trucks, special screenings and events, visithiwirebrewing.com/event-calendar. To learn more about Taste & See, search for the truck on Facebook.

• The Bom Bus Portuguese food truck has found a niche in Black Mountain. Look for the blue mini-bus at Grow Down Market Home Market, 105 Richardson Blvd. For a complete schedule, search for The Bom Bus on Facebook.