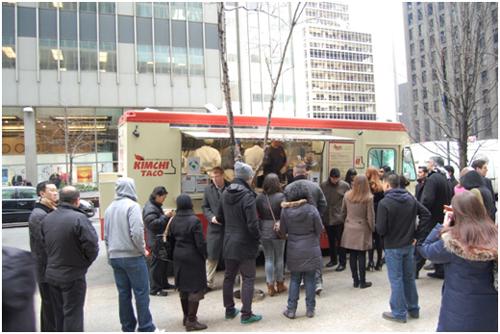 NEW YORK, April 5 (Yonhap) — On a usual weekday in Midtown Manhattan, John Lee and his wife were busy dishing out hearty Korean fare for the lunch crowd at Bapcha, their food cart that they park between the skyscrapers of this office-heavy neighborhood. With such satisfying offerings as rice topped with galbi or bulgogi — two different Korean meat choices — Bapcha, which translates literally to “food car” in Korean, has become a Midtown fixture since it opened in 2004.

“I can get galbi for one person for under US$10 from Bapcha. I don’t have to make it an event to go eat galbi in Koreatown,” said one customer, Gladys Kim, a teacher in Manhattan, praising the bold, savory flavor of the grilled beef short ribs.

She said she also loves bulgogi, another typical Korean dish made of thinly sliced beef marinated in soy sauce and sesame oil, spread over rice.

For those in the mood for less carnivorous fare, right next to Bapcha’s main cart is the Bapcha Noodle Cart, which sells Korean snack dishes including ramyeon, Korean-style spicy ramen, and jajangmyeon, noodles with black bean sauce.

In the largely residential neighborhood of Chelsea, there is Kofoo, around the corner from the Fashion Institute of Technology. Kofoo, a playful abbreviation of “Korean food,” has been catering to locals for seven years, focusing on takeout and deliveries from a tiny storefront.

Even at 3 p.m. on a recent weekday, customers clustered as they waited for their takeout orders of japchae bap, sweet potato noodles with vegetables over rice, and kimchi chigae, a spicy kimchi stew, while the phone kept ringing with delivery orders.

Although fast Korean comfort food seems to have found itself suddenly in the spotlight, those in the dining industry have been laying the groundwork for the cuisine’s rise among mainstream Americans for much longer.

The first to garner notable attention was David Chang, the chef who started the acclaimed Momofuku Noodle Bar in 2003. He followed up that success with the opening of Momofuku Ssam Bar in 2006, featuring his rendition of a popular pork-kimchi-oyster combination in Korea.

Despite their humble beginnings, both Korean-American chefs earned their chops, eventually claiming the coveted title of Food and Wine magazine’s “best new chefs” in the U.S. Chang took the prize in 2006, followed by Choi in 2010, who was also the first food truck chef to win the title.

The economic downturn that began in 2007 also gave a push to more reasonably priced meals in the U.S. More people started bringing their lunch to work or looking for cheaper dining options. And under such a dreary economic outlook, people craved hearty comfort food.

The recession struck New York City in particular. As a center of the finance industry, the city saw its fine dining restaurants struggle and eventually some landmarks closed, including the French restaurant Chanterelle and the Rainbow Room at Rockefeller Center.

Meanwhile, on the other side of the culinary spectrum, gourmet dessert trucks started popping up at Manhattan street corners in 2007, serving refined sweets at cheaper than restaurant prices.

The city also has been at the forefront of hot culinary trends, be they cupcakes, Korean fried chicken, Japanese ramen or Vietnamese banh mi sandwiches.

Traditionally, Korean restaurants in Manhattan, mostly grilled meat joints, have been concentrated in Koreatown, within a couple of blocks’ radius of 32nd Street between 5th Avenue and Broadway.

While Woorijip and E-Mo Kimbap have long been popular stops for quick bites and takeout at reasonable prices, the opening in January of Food Gallery 32, a sleek food court in the neighborhood, may indicate a more prominent shift toward diverse Korean food outlets in the heart of Koreatown.

The new venue seems to strike a chord with Korean food enthusiasts and novices alike as a casual, approachable place with a variety of hearty offerings, reasonable prices and single-diner and group-friendly seating areas.

“I was just walking by and this place looked interesting. It’s impressive,” said Rosemary Laflam, a college student from Maine visiting the city for the weekend.

“I’ll definitely come back to try other dishes,” she said, expressing her satisfaction with her stir-fried seafood bowl, the first Korean food she had ever tasted.

For Mike McBrearty, an engineer working in the area, this is one of his regular lunch spots.

“I like Korean food because of the flavorful spiciness of its many dishes. This place is great for trying different (Korean) dishes,” said McBrearty as he polished off his bibim naengmyeon, a dish of cold buckwheat noodles mixed with chili sauce.

As Korean Americans from New York, the owners of Korilla BBQ and Kimchi Taco know the market. After growing up eating Korean cuisine, they are also enthusiastic about its prospects as they tap into the current food truck trend as an active way to approach urbanites.

“Korean food is still undervalued and underappreciated in the U.S. It has so much potential,” said Edward Song, the 25-year-old founder of Korilla BBQ. “Our food truck is only a starting point.”

Youngsun Lee, chef and co-founder of Kimchi Taco, also sees a bright future for his venture. “We are starting with this (truck) to build a Korean food brand.”

In addition to serving up Korean-fusion offerings, this new generation of Korean food trucks shares common ground with Kogi and other gourmet truck predecessors.

They are tuned in to local concerns, offering high-quality ingredients and vegetarian-friendly options. They communicate directly with customers via their Web sites and Twitter, providing daily and last-minute updates, taking feedback on food and suggestions on their next stops.

“I read great reviews about Kimchi Taco and found that they were coming here today from Twitter,” said Jennifer Foyer as she waited patiently in line for 20 minutes in freezing weather. “Kimchi arancini sounds so yummy,” she said as she considered the Korean take on breaded-and-fried Italian rice balls listed on the menu.