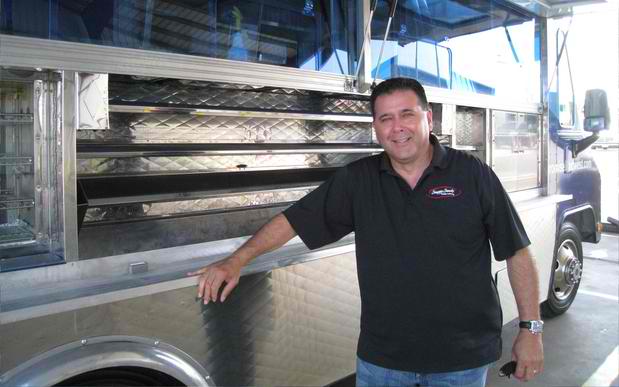 Mobile food vendors in Austin will have to

comply with six new city requirements intended to safeguard public health and safety under regulations that the City Council approved Thursday in a 7-0 vote.

But the new regulations do not include one highly sought by Tom Ramsey, the owner of a fleet of food trucks whose complaints triggered a 16-month city review of the mobile food vending industry. Ramsey pushed for a definition of the requirements for a central food preparation facility, or commissary, where vendors can prepare and store food and clean their vehicles.

Ramsey argued that without it, vendors were exploiting gaps in Austin’s rules, creating health and safety risks. He has long accused some of his competitors of selling food prepared from home — against city regulations — not paying sales taxes, operating vehicles with dangerously mounted propane gas tanks, and dumping waste grease in car washes not equipped to handle it.

The new regulations, which take effect Oct. 4, address some of those issues.

“We recognize that in the spirit of compromise we weren’t going to be able to get everything we were pushing for,” said Paul Saldaña, a consultant representing Ramsey.

“At the end of the day, we feel this is a step in the right direction, but there’s still work that needs to be done.”

Speaking to the council before the vote, Saldaña asked officials to consider adding a commissary definition and to educate vendors about state rules governing use of food preparation facilities. Mayor Lee Leffingwell asked city staff to consider the requests.

The vote ends, at least for now, a debate that had all the ingredients of an Austin-style dustup, bleeding into questions about what makes the city special and whether city red tape is too hard on small businesses.

At one point, it pitted the old-school vendors — those who drive across the city catering to construction workers and office tower employees — against new upstarts, the operators of the trendy food trailers serving up everything from cupcakes to curry.

The booming mobile food vending industry has doubled since 2006, when it had 648 vendors. City officials project that the number will increase to 2,198 by October 2011.

Bob Gentry, a co-owner of Torchy’s Tacos who operates a South First Street food trailer and several restaurants in Austin, said he was pleased with the final outcome.

“I think it gives (the city) an opportunity to feel more secure about the health and safety of the public, particularly having the Fire Department involved,” he said.

In May 2009, Ramsey urged the council to add teeth to the city’s mobile food vending ordinance. Ramsey said Austin’s regulations fell below the standards of many other Texas cities — he said he had identified 42 regulations imposed elsewhere but not here.

The new regulations were recommended by the Austin/Travis County Health and Human Services Department , which said that public safety was its top priority as it pared down a longer list of initial recommendations. They come with two new fees for vendors — a $125 application fee and a $125 Fire Department inspection fee for units that use liquified petroleum gas.

City officials project that revenue from the new fees and from additional permits will generate $260,000 per year, enough to cover the cost of the new staff positions.

Vendors will be required to:

Provide notarized agreement from the facilities.

Provide an itinerary of truck routes.

Provide written permission for employees to use restrooms at businesses from which the vendors lease space.