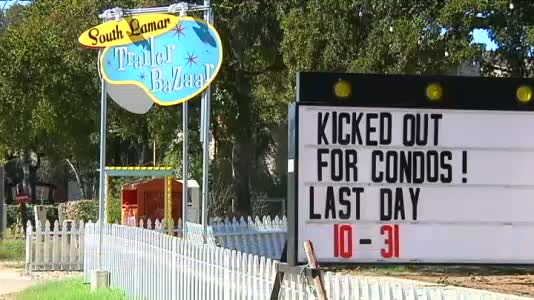 Another trailer park in South Austin is facing pending doom.

Earlier this month, trailer owners on South Congress got word they would have to relocate by February 2013 to make way for a hotel.

Now, the next victim to new development is the South Lamar Trailer Bazaar, just north of Ben White Boulevard.

It was life-changing news for tenants like Rob Collie of Collie’s Burgers. Monday, Collie moved his 36-foot trailer into Jessie Street Eats, after spending almost six months at the South Lamar location.

Trailer owners were told they had to move by Oct. 31 to make way for a mixed-use development.

Food trucks are a loved by many Austinites. Jessica Fillingame doesn’t want to lose the ones closest to her office.

“Well that’s kind of sad,” she said. “It was like a little food court that was better than a food court, and now it’s just disbanded and they’re all over the place.”

In the meantime, Collie’s hoping his regulars will go the two-mile distance to see him again. He knows it won’t be tough to build up his clientele at his new location on Jessie Street near Barton Springs and Lamar.

“We’ve got some great neighbors outside the park, Thom’s Market, Barton Springs Saloon, Talisman, and there are all these folks around Jessie Street,” Collie said

If a developer does eye the spot, Collie said he will just pick up and move again or open a more permanent location to avoid the hassle all together.

To host a trailer park, a property owner leases out the land, and then the landlord leases the spots to trailers.