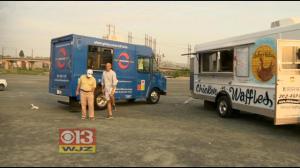 BALTIMORE (WJZ)—When the Orioles take on the Nationals at Camden Yards it won’t be the only battle between Baltimore and Washington this weekend. Another one is brewing Saturday, and it’s all about food.

Ron Matz has more on “A Taste of Two Cities.”

“It’s a good town. The people are friendly,” said Godfrey, who owns Chicken N Waffles food truck. “We do the waffles and chicken. We do breasts, thighs, legs and wings. We also do burgers and tilapia fish. We have Boardwalk fries.”

Saturday at Westport Waterfront, it’s “A Taste of Two Cities,” where 20 food trucks from D.C. and 20 from Baltimore compete for bragging rights.

“We started thinking about doing this last year,” said Damian Bohager, Maryland Mobile Food Vendors. “Washington has about triple the number of food trucks Baltimore has. They have about 80. We have about 20, so we thought it was time to pit 20 of our best food trucks against 20 of their best food trucks.

“We’ve got a 16 acre site with a ton of parking. We’re going to have four bands, 40 food trucks. We’ll have beer, wine and entertainment. It’s just going to be a great day,” he continued. “The best overall truck is going to win the mayor’s cup, which is a large trophy. The city who wins the cup, their food organization will get to keep the cup for a year.”

“We’re very excited about Saturday since the food truck gathering coincides with the Nationals coming to town. I’m quite confident in both ways. The Orioles will win and the Baltimore food trucks will certainly be on top,” Jennifer Cullen, who owns Busia’s Kitchen, a food truck named after her Busia grandmother. “We serve traditional polish food and American food. We have perogies, potato pancakes, sauerkraut and sausage.”

The D.C. foodies are ready.

“Like I said, we’re trying to go home with the trophy, the mayor’s cup. The mayor’s presenting it,” Craig Barsi of That Cheesecake Truck, said. “We hope not to leave empty-handed.”

“We’re going to have a table with information about BARCS. We’ll have some adoptable animals as well and merchandise to sell for donation to help the animals. Any money that we can raise would be great,” said Denise Smallman-Chilcoat, BARCS events coordinator.

It’ll be a food fight to the finish.

“Food trucks are the fastest growing segment of the food industry. It got very large on the West Coast. It’s very big in New York. We’re a little bit behind the rest of the country, but we’re growing by leaps and bounds. A year ago in Baltimore we had only six food trucks. Now we’re up to 20 and counting,” Bohager said.

Local celebrity judges and event goers will help determine the winner. “A Taste of Two Cities” runs Saturday from 11 a.m. to 7 p.m.