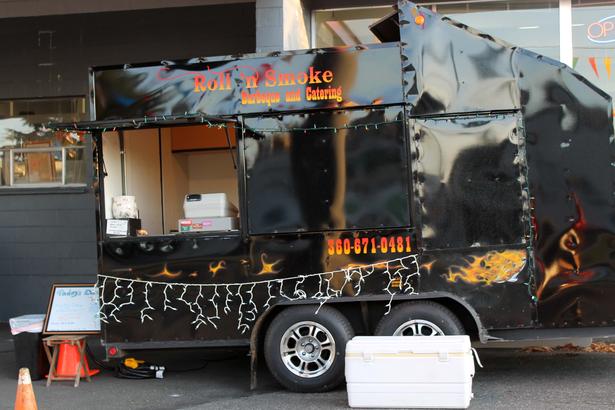 The lunch-time option list keeps growing in Bellingham, with a caravan of food trucks recently rolling onto the scene, and bringing with them quick alternatives for hungry ‘hamsters.

What was once one or two taco trucks, a fish and chips train car, and a few other scattered rolling eateries, has turned into a convoy.

If gathered together in one spot (as many of the owners wish for, one day) diners would have an outdoor food court of sorts–with a variety of options bound to please everyone in the family.

“Everyone’s got their own little thing going,” said Vicki Lynne, who owns and operates Roll’n Smoke Barbecue with her husband Keith Stephenson.

Roll‘n Smoke provides hungry ‘hamsters with some home-style barbecue and Hawaiian dishes like grilled beef and Kahlua pork and cabbage.

“We eat barbecue year round,” Stephenson said. “Everybody else should too.”

And, like most of the vendors in the area, most of Roll’n Smoke’s offerings—from the rubs to the sides–are made from scratch.

While the multitude of food trucks provides customers with a lot of options, it does just the opposite for the vendors. The chefs of each vehicle get to focus and specialize on what they want to be known for, instead of creating a large menu to appease everyone.

That’s how we end up with specialty trucks like WAFL Stop—which only has one thing on the menu: waffles.

Owner Brian Shultz makes the batter for his plate-sized fluffy waffles from scratch, as well as the strawberry, blueberry and banana toppings to go with them.

The effort the vendors put into their products and the quality of the ingredients show that Bellingham’s food vendors are out to change the perceptions of food trucks as greasy, low-quality eateries, which Shultz said makes them the obvious choice over many chain restaurants.

It’s not just the variety and opportunity to create a real niche that makes these eateries on wheels so appealing to the owners. Many of the owners say the bottom line when choosing a mobile operation as opposed to a classic brick and mortar outfit, is the bottom line.

“I don’t have a huge cost of trying to start a restaurant,” said Dennis Ansell owner of the newest food truck, Carmen’s outside the Public Market, in the location that used to be Ilse’s Shnitzel House.

Ansell serves a collection of gyros, hot dogs and sausages, he said, because they’re the street foods he wants to eat.  And because he can focus on only the items he wants, he doesn’t throw away a lot of food.

During the past week, his first week open, Ansell said he has sold out of at least one item everyday. It’s the convenience, quality, and affordability that make food vendors attractive to diners too.

“I can sell a sandwich for $6, and it’s more than enough for the average person,” Ansell said. “You get a lot of bang for your buck. And that’s what we need in this economy.”

The talk around town is that one day there might be a place for all the trucks to gather in one area, as sort of an outdoor food court.

Because, as Ansell said, “[The food trucks’] time has come here in Bellingham.”