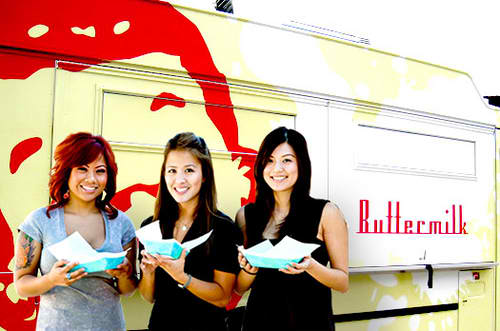 The food cart phenomenon is catching on quicker than organic kombucha at an iPad convention. Yeah. Getting food from a cart is not a new premise. However, in recent years these culinary troubadours have really, um, kicked it up a notch. Nearly every major city, and many minor ones, play host to a diverse array of food carts and food trucks that serve up just about everything under the sun. So which ones are worth braving that icky outside world for? Here is our list of the best and tastiest food carts in America. We are attaching Twitters when possible so you can keep track of where they’ll be on any particular day.

For those keeping track, this insanely addictive food truck used to be called NYC Cravings. It may have changed its name, but it did not change its mouth-watering array of Asian specialities. It offers up “bento box” lunches that range from fried chicken over rice with gravy to Taiwanese pork chops. It has also recently set up shop at an actual brick and mortar establishment in midtown Manhattan.

Thiru Kumar and his legendary dosas have been an NYC staple for years now. A dosa, to the uninitiated, is an Indian delicacy that consists of a thin, crepe-like wrapper that is topped with an assortment of delicious toppings. Thiru keeps things vegetarian and doesn’t stop at the dosas. He has been known to serve up some mean currys and soups as well.

Grab your dumplings from a truck named Rickshaw that, honestly, isn’t all that far from an actual rickshaw. These dumplings are fresh and oozing with porky(or vegetably) goodness. They come with dips that are miles above the usual soy sauce and sugar concoctions that accompany average dumplings. The truck also serves up sides like edamame and noodle salad. Dumplings clock in at around six bucks for a six pack. Not bad for a filling lunch.

Halal food carts are on just about every corner of NYC. Most of them serve up barely adequate lamb dishes and average chicken and rice concoctions. Sammy’s, on the other hand, is different. This duo of Vendy award-winning food carts serves the best Halal food you’ll ever dip a plastic fork into. The meat is moist, tender and thankfully devoid of the “funky bits” that populate the meat at other Halal carts. Try the lamb over rice with green sauce. It could change your world.

Most trucks or carts specialize in lunch and dinner fare. A taco here. Some lamb there. The Buttermilk Truck, however, is all about the breakfast. They serve up unique takes on classics such as french toast sticks, biscuit sandwiches, donuts and, of course, pancakes. Don’t worry, lazybones. Their signature breakfast items are served all day and late into the night.

Food carts are great for trying out new things with little-to-no risk. Don Chow Tacos has taken this to the nth degree with tacos that are one-part Mexico and one-part China. Taco toppings range from barbeque pork and soy-singer shrimp to traditional Mexican fare. They even have a signature version of a tamale, known as a “chimale.” This culinary mash-up wouldn’t have legs if the food wasn’t good. Luckily, it’s great.

Just like food carts, the Vietnamese Bahn Mi sandwich has also experienced a burst of popularity in recent years. Nobody does this popular sandwich better than Los Angeles’s Nomnom. They serve up delectable 12″ sandwiches that are topped with Bahn Mi staples such as grilled pork and lemongrass chicken. Nomnom has also recently gotten into the catering business so now you can make family gatherings a tad less miserable.

The famous 4-truck Kogi team travels all over Los Angeles filling up stomachs with their unique blend of Korean and Mexican cuisines. The prices are out of this world, with Kogi originals like the Korean short rib taco coming at just two bucks. The taste? Also out of this world. As a matter of fact, Kogi is so popular that their Twitter account has racked up 80,000 followers as of this writing. They’ve been featured on tons of newspapers, CNN, websites, and even Youtube(Wow!)

While you’re there, check out Bestcovery’s own creation – The Pregnant Burrito!

Spencer on the go

If there’s one style of food that is criminally under-represented in the world of food carts, it would be French cuisine. San Francisco, however, has the renowned “Spencer on the go” food truck. It offers up unique versions of French standards, such as escargot lollipops(really) and foie gras on toast. Oddly, the prices are not only reasonable, they are downright amazing. Sacrebleu!

All hail the mighty cone! This Austin food truck is known for fanciful tortilla creations, like chicken rolled in corn flakes and almonds and then fried. These truly must be tasted to be believed. The perfect amount of crunch and spice. Don’t worry, cono-phobes. They have burgers, fries and milkshakes too. You should really try one of the cones though.

Austin is a city known for it’s meat. BBQ, delicious pork tacos, you name it. So why did we choose a food truck that serves everything but meat? Well, the food is damned good. Vegan Yacht serves up meatless versions of meatful favorites like seitan quesadillas and mock chicken sandwiches. Plus, would it kill you to eat something healthy once in a while? Luckily, the food here is so good, even mega-carnivores won’t be complaining.

Marfa is a small Texas town situated close (as Texan distance goes) to New Mexico. For some reason, this small Texas town features one of the most renowned food trucks in the entire country: Food Shark. Food Shark serves up some of the best falafel sandwiches and Mediterranean lunches you’ll ever have the pleasure of eating. Try the Marfalafel sandwich and you’ll be grinnin’ bigger than a Texas sunset.

Chef Shack has been turning Minnesota’s foodie frowns upside down with their innovative, and always-changing, menu. On any given day you can find expert renditions of duck soup, pulled pork nachos, Indian donuts and just about anything else under the sun. It’s the perfect food truck for the person who literally has no idea what kind of food they want until they see it. Yeah. I’m looking at you.

Addy Bittner is a true “sandwich artist” that even Jerod “Subway” Fogle would have to approve of. The sandwiches served at this charming Portland food truck are, often, revelations. Of special note is their ham, gruyere, butter combination and the duck confit special which also features shredded cabbage and cranberry relish. There are sandwich and soup specials that change weekly so keep an eye on their Twitter.

Portland is so indie that even their food carts are puns off of cool bands(Built to Spill, in this case.) BtG serves up tasty Italian fare: Paninis, a variety of fresh pastas and meat courses are the norm here. It’s really a strange and cool feeling to be digging in to a plate of delicious gnocchi you got from a truck. Be sure to follow the Twitter and rush over when a new batch of risotto is ready. It sells out fast.