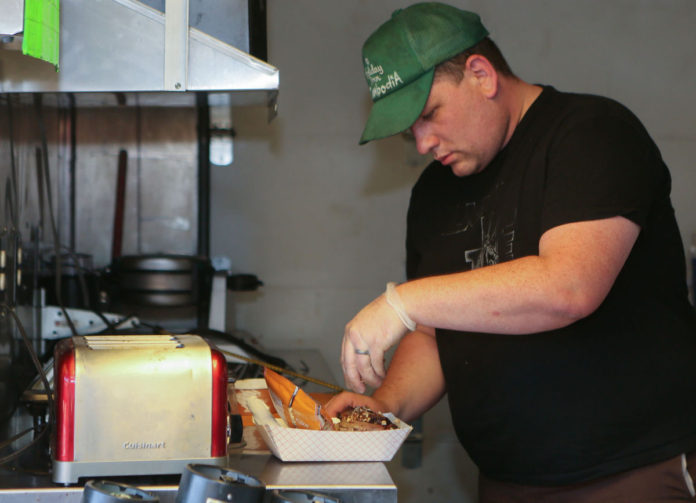 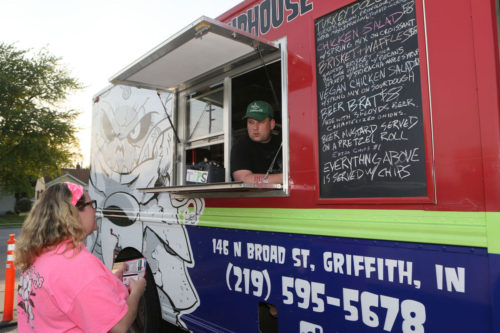 A growing number of gourmet food trucks have been hitting the streets of the Region, selling artisanal and exotic dishes such as curry goat, citrus shrimp tacos, and ginger kombucha.

Foodies in cities elsewhere have been chasing down high-end food trucks for elevated fare like Korean BBQ spare rib tacos for years, but the trend is just starting to take off in Northwest Indiana.

These trucks are not the ones older generations may remember, which camped outside construction sites or steel mills, selling hot dogs and other easily prepared items.

Anyone interested in sampling popular dishes like Sizzlebox’s deep-dish grilled cheese sandwich or Grindhouse’s brisket and waffles can try them at farmers markets, outside craft breweries or during the Region’s many summer festivals.

More and more chefs have been taking the food-truck road, because the overhead is lower, they can travel to customers, and they can be more creative with frequently updated menus. 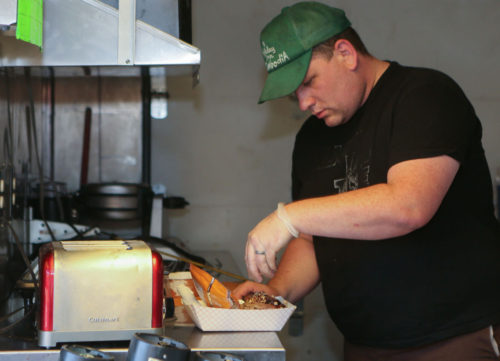 Lake County, Hobart and other local governments have been updating their regulations because of the trend.

Food trucks are not without their detractors. Most notably, South Shore Convention and Visitors Authority President and CEO Speros Batistatos has criticized food trucks for carrying wastewater and garbage in the very vehicles where they prepare and serve food, for not paying as much in taxes as brick-and-mortar restaurants, and for potentially taking business away from established eateries.

“When discussing this, I would separate the need to have additional vending at special events where you have huge density and limited time,” he said.

“During festival season, there’s a much different scenario than some guy with a Costco membership and a truck who fancies himself a restaurateur. There’s enough restaurant inventory to meet demand, there’s no one standing in line for lunch anywhere in Lake County.

“As my mother said, there’s no need to jump off a cliff just because it’s trendy or popular in other places,” he said.

But more and more food trucks nonetheless have been springing up, even though one of Northwest Indiana’s earliest and most popular, Hungry INC., closed earlier this year after owner Phil West took over concessions at U.S. Steel Stadium in downtown Gary.

He’s looking at organizing a food truck event there, and local food truck operators have talked about teaming up for a food-truck rally that likely also would involve live music and craft beer.

Grindhouse Cafe owners Gabriel Mauch and Kathryn Mauch, who opened the popular coffee shop in downtown Griffith four years ago, launched a food truck in September to bring their gourmet coffee sandwiches to the entire Region and to serve a rolling billboard for their coffee house.

They’ve made the rounds at farmers markets, big events like Girls on the Run, and craft breweries such as New Oberpfalz, Pokro Brewing and Windmill Brewing.

“There are a lot of food trucks out there that are even newer than us,” Gabriel Mauch said. “I think they’re the future. It’s a great way to be creative.”

The Grindhouse food trucks offers sandwiches available at the cafe but also specials like the hugely popular brisket and waffles, with slow-cooked meat from Bombers BBQ, Sriracha maple syrup and pecans. It also will roll out specials like a duck bacon BLT and snacks like hummus and vegan beer cheese.

Food trucks have benefited from the explosion in local craft breweries, which often want to serve food but not have kitchens so they can focus on the beer, Gabriel Mauch said.

“The people who are interested in good beer usually want interesting food, too,” he said.

Juan Serrano, who launched the popular Sizzlebox in May 2015, had wanted to open a traditional brick-and-mortar restaurant, but found the overhead for a food truck was lower, though he said permit costs add up quickly.

Now he’s serving up items such as baja plantain fries and ribeye tacos with spicy nappy cabbage and ginger aioli at breweries like Wildrose Brewing and at festivals like Griffith’s Rock and Rail, Hammond’s Festival of the Lakes and Whiting’s Pierogi Fest.

“It require a whole lot of work, but I love to create food items, and this gives me the flexibility to create different dishes,” he said.

“You have the creativity to try something, and you don’t have to have tons of money to make the jump. It’s a blast. There’s definitely an adrenaline rush in busier areas.”

Wanting to open a food truck, Amanda McGrath relocated to Michigan City from Chicago and started Lulu’s Licks in an antique truck last June. It’s named after an abused rescue dog she adopted, and she donates part of its proceeds to the animal rescue.

“Lulu’s an Australian Shepherd mix I rescued,” she said.

“She was abused pretty badly, but I fell in love with her over several months and gained her trust. She changed my life. She has a soulful personality and licks everything – hence the name. The picture on the truck is Lulu’s.”

The Lulu’s Licks food truck, which appears at the Michigan City Farmers Market and then the Lighthouse Place Premium Outlets every Saturday, has a menu that features fresh fruit bubble teas, empanadas, ceviche tacos, and Peruvian pork belly.

“If business is slow at a restaurant, you can’t do that much,” she said. “But if we’re not doing well, we can go somewhere else and find the business.”

Food trucks can lead to brick-and-mortar restaurants, like the one Rolling Stonebaker plans to open by Central Park Plaza in downtown Valparaiso in the next few weeks.

The popular food truck opened in 2010, and since has gained acclaim, especially for its Purple Pig pizza, which features pulled pork shoulder with five cheeses and a red cabbage slaw. Rolling Stonebaker now has two trucks, including one that’s stationed in Beverly Shores when it’s not catering private events.

“The catering has grown rather quickly,” owner Andrea Georgion said. “When you start, you really have to sell yourself. Now people are calling us. The phones are ringing.”

She’s installing a wood-fired pizza oven that’s believed to be the first in a Northwest Indiana restaurant and came from France, at the new Rolling Stonebaker restaurant at 54 Lafayette St., next door to the new Urschel Pavilion ice skating rink. “It’s a great opportunity, and the city has done such an amazing job with growth and expansion downtown,” she said. “We’re already established in the community, because of the trucks.”