By Alex Soulier  |  My Surburban Life

“I serve a local customer base, so I wanted all the ingredients to be fresh and from the area,” Doss said. “I buy the vegetables from markets and farmers, the buns are from nearby bakeries and I butcher all the meat myself.”

Doss wakes up at about 6 a.m. daily, preparing a menu of sandwiches which he describes as a gourmet take on the cheeseburger – chicken breast covered in jalapeno pineapple coleslaw, portabello with sun dried tomatoes and grilled red onions, sirloin steak drenched with red wine barbecue sauce and tilapia topped with pickled veggies.

Since starting his food truck business in August, Doss has has mostly served lunches at the Quadrangle and other community hot spots, and the chef is still assessing the market, trying to find the ideal place to park his restaurant.

“The Quadrangle has been a good spot, but the lunch crowd only lasts a couple hours,” Doss said. “But, I will stop anywhere there are customers. If you see me driving and want some food, just honk and I’ll pull over and start cooking. It’s what I love to do.”

Food is a passion Doss has cultivated from a young age. The son of Gigi Simmons and Harold Doss, Tobaris Doss was born and raised in Saginaw, Mich. before moving to Bolingbrook and attending Bolingbrook High School.

He explains that some of his earliest memories involve cooking with his grandmother, who worked for the local school district and held several other cooking jobs, and frying bologna sandwiches and hot dogs in grade school.

“I watched what my grandma did in the kitchen then tried to replicate her actions,” Doss said. “It was my way of being independent. My dad would turn on some music, then I could be myself and start cooking.”

As a Bolingbrook High School student, Doss worked in kitchens at a local Red Lobster and Olive Garden. He graduated in 1996, bounced from job to job, and eventually making his way west to Las Vegas. 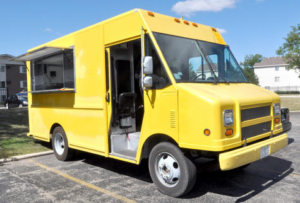 At age 27, he enrolled at Le Cordon Bleu Las Vegas culinary school and landed a job as an appetizer chef at Alize, a Michelin Star French restaurant located in the Palms Hotel and Casino.

After two years at Alize, Doss left to finish school and find other culinary employment. He explains that being a good chef entails hording knowledge – accumulating skills from every position, then refining and tailoring your work during free time.

“I have worked dozens of cooking jobs,” Doss said. “But, that’s a good thing. You learn what works and what doesn’t, what makes people happy and what upsets them, and what tastes good and what tastes terrible. It’s all about learning experiences.”

Fusion Mobile Food Truck is the culmination of all his positions worked in the food industry, blending all the gourmet cuisines he has learned during his years as a chef.

“I have always wanted to own my own restaurant, so my dream is finally coming to fruition,” Doss said. “Someday I will open my own storefront and serve the affordable gourmet cuisine that is missing from the suburbs.”

But, until that day, Bolingbrook residents just need to honk when they see the yellow Fusion food truck.