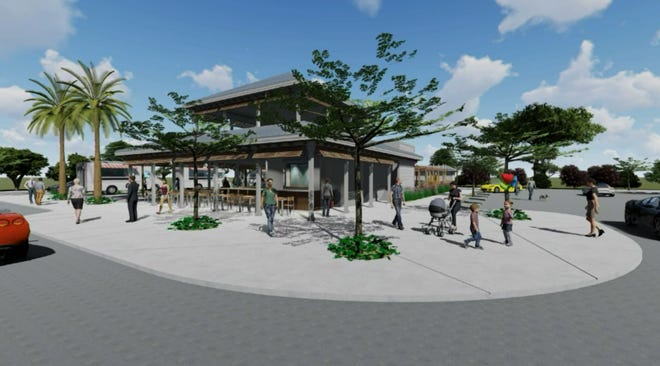 Downtown Bonita Springs will have a food truck park after the city council approved a developer’s plan during a Wednesday meeting.

The park would have eight pads for food trucks with full utility access, early plans show. A two-story seating area and bar with restrooms would anchor the project. Additional patio space and a playground with mist wall would complete the site at 27333 Old 41 Road. The lot sits on the north side of Reynolds Street across from Engel’s Bicycles.

The developer, Magnus Family Investments, estimated the project would be finished in two years at a cost of $3 million.

“We want to add value to the community through this project,” developer Chris Magnus said.

Magnus Family Investment was the only developer to submit a proposal for this site, known as the Levin lot. Councilors approved the food truck plan 6-0. Councilor Amy Quaremba was absent.

The developer will buy the property for $425,000.  The city was given the property in 2013 by Rhoda Levin as trustee of the Bernie Levin Trust Agreement.

City Council will need to approve formal sale and rezoning documents in the coming months to finalize the project.

Twenty-five parking spots would be built in a separate city lot immediately south of Riverside Park at 27400 Old 41 Road. Dozens of additional parking spots line roadways in the surrounding blocks.

The developers estimated it would pay nearly $18,000 in city taxes every year, based on current rates.

A sweeping food truck ordinance was passed by the City Council earlier this month, although it was aimed mostly at mobile food vendors and not parks. The ordinance removed a citywide limit of five trucks and keeps mobile food trucks out of downtown parking lots and businesses.

Several restauranteurs spoke against the ordinance, saying it would hinder business during an economic downturn created by COVID-19. Chris Magnus said the park would not interfere with brick-and-mortar restaurants rebuilding.

“It will be two years before we open,” he said. “That’s more than enough time for restaurants.”

Every councilor present had positive feedback, noting the visual appeal and opportunity to spur development.

At the same meeting, City Council voted against a proposed project for Imperial Crossing, formerly known as Bamboo Village, on the Imperial River. The developer asked the city to donate the land and grant a 10-year tax abatement in return for a $26 million project that would have included 32,000-square-feet of commercial space and 112 single-bedroom apartments.