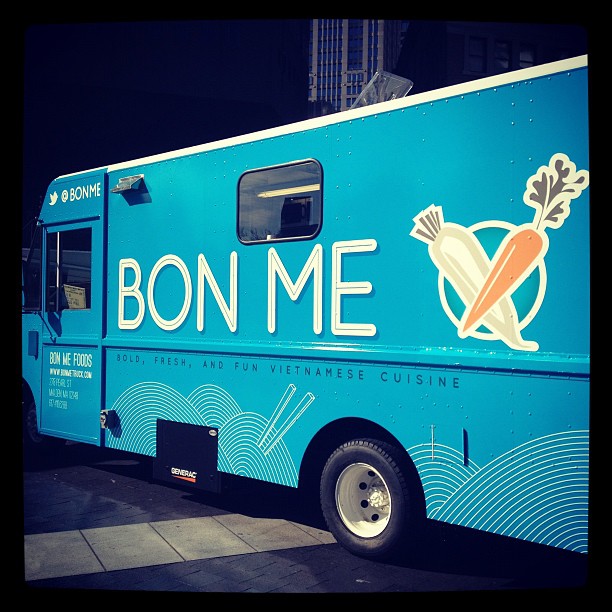 While I’m one of the biggest advocates of food trucks in Boston, I’m the first to admit it’s hard to keep up with their rotating schedules. Luckily, tracking down that delicious BBQ pork sandwich is about to get a whole lot easier. In a recent blog post, local Vietnamese-themed food truck Bon Meofficially announced a brick and mortar restaurant:

Truck owners Patrick Lynch and Ali Fong have been eying a space in Kendall Square for a while now, and have finally made it official.  Bon Me is moving to Kendall Square!  Just last week we signed the lease for our first brick-and-mortar restaurant in the One Kendall Building, where we will join an awesome neighborhood just around the corner from MIT.  We are stoked to finally have a real-life address, and a home that isn’t always on the move!  We’re still in the process of planning our build-out… but be looking for us to open our doors near the end of the year.

Bon Me isn’t the first mobile eatery to go stationary. In 2010, Clover opened its first brick and mortar shop in Harvard Square, and eventually opening another in Kendall Square as well (while simultaneously adding more food trucks to its army).

Roxy’s Grilled Cheese owner James DiSabatino has alluded to food truck down the road, telling BostInno last fall, “We have plans for the future that include seats and tables. And maybe beer.” Just last week, Roxy’s posted an Instagram photo of a binder with their logo that reads “Burgers,” and the caption, “Wtf?”

Could that mean a new stationary Roxy’s with burgers? A spin-off food truck? When we asked about the photo, DiSabatino simply responded, “That’s a top secret pink binder.” Damn you, Secrecy.

So, are food trucks trading in the wheels for a stationary ventures?

Not exactly. It’s basically a chicken and the egg situation. On the flip side, a few brick and mortar restaurants in the area have opened food trucks to bring their fare around town, including Somerville’s Redbones BBQ and Kickass Cupcakes.

Congrats to Bon Me, and we look forward to eating some delicious rice bowls from a place that’s not on wheels very soon!