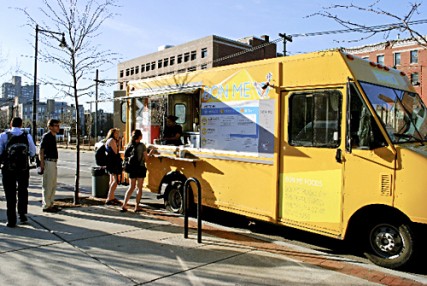 He called Boston’s newest schedules for the city’s food trucks “very fair,” even though the city used a lottery system this year to parcel out prime time at the most highly coveted food truck spots in Boston.

The scheduling process took the form of a “random, draft-style selection” bid last week, according to a City of Boston press release, when 23 food truck vendors vied for breakfast, lunch and dinner shifts at seven spots around the city, including spaces outside of City Hall and the Boston Public Library’s main branch.

This way, “everyone gets a fair chance at what are considered the prime spots,” she said. “It’s open to the public – everyone sees what’s going on. It’s a random drawing.”

The result of the lottery, a schedule that bounces vendors from location to location over a week’s course, accords with the nature of food trucks, Sarni said.

“If the location isn’t working, move,” he said. “You’re mobile. That’s the beauty of the food truck industry.”

Most vendors were pleased with how the city handled the distribution, Ross said.

“I would say overall, 95 percent of food truck venders are pretty happy with the way it’s going,” she said, and added that the Boston Food Truck Program has been “trying very hard to make everyone happy.”

“The city has been really proactive in planning the program to make it fair to everyone,” she said. “They’re taking into consideration not only the nature of the food trucks but everyone else as well – the citizens, parking, different departments – [and] support[ing] businesses that the food trucks are around.”

In fact, Boston ranks as one of the more progressive cities when it comes to food truck policy, Sarni said.

“If you look at Miami, not one food truck is allowed on the streets of Miami, not one. Boston could have done that but they didn’t,” he said. “If you look around to other parts of the country and other models to see what’s going on, I think you will see that Boston is one of the most supportive food truck cities in America.”