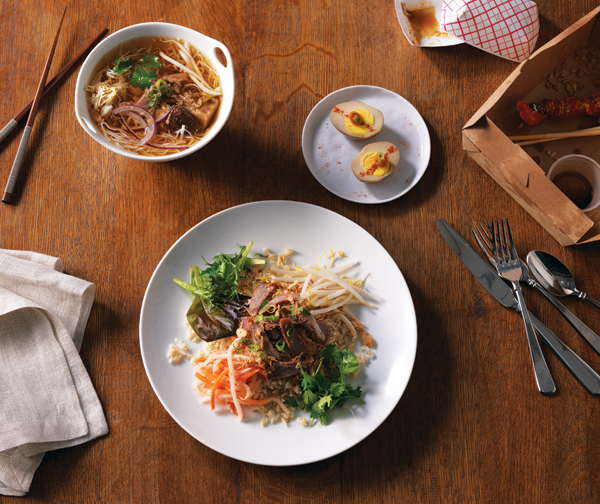 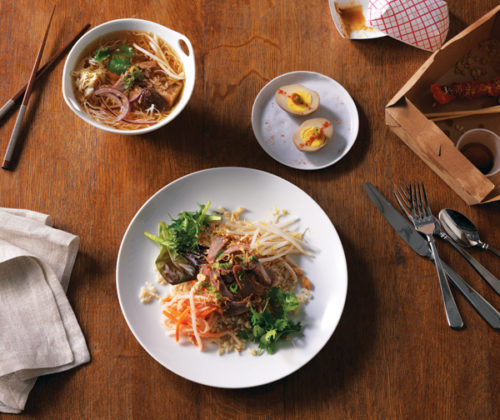 Thanks to the city’s food-truck initiative, Boston has a number of mobile eateries offering creative, inexpensive street-side fare. Several of these trucks are experiencing wild success selling everything from locavore pork buns to short-rib-studded grilled cheese sandwiches, and now many of their owners have their eyes on a more permanent goal: a restaurant.

Bon Me, Momogoose, Mei Mei Street Kitchen, the Taco Truck, and Roxy’s Gourmet Grilled Cheese all plan to open quick-service restaurants in addition to their already popular trucks. “We designed our concept with it in mind—that the truck was a little bit of a tester for a restaurant,” says Bon Me co-owner Patrick Lynch, whose Kendall Square restaurant, which opens this month, will serve up the same banh mi sandwiches and rice and noodle bowls that his food-truck customers know and love. The restaurant, though, will also offer more complicated dishes, such as cooked-to-order udon-noodle soups.

So what’s behind this mobile-to-stationary trend? It turns out that using a food truck as an incubator for a new restaurant concept, especially an unusual one, makes a lot of sense—it’s market research on wheels, and a much smaller investment. The cost of launching a truck—between $40,000 and $150,000, depending on how souped-up it is—pales, financially, next to the commitment of signing a long-term lease for a restaurant space, which can run at least $200,000 and balloon to more than $1 million. “If you sign a five- or ten-year lease, your ability to experiment or try new things is really limited,” says Ayr Muir, who in 2010 opened Clover Food Lab in Harvard Square—one of two restaurants and seven trucks he now operates. “With the trucks, your failure cost is low, so you can try more things.”

Testing dishes in food trucks not only helps determine the kinds of things customers gravitate toward, it also gives the truck owners time to experiment with suppliers and neighborhoods before making a commitment. “Having the food truck, and getting it up running and operating, was an invaluable step,” says Mei Li of Mei Mei Street Kitchen, known for its funky, from-the-farm Asian cuisine (she’s tentatively looking to open a restaurant near the St. Marys Street Green Line stop this spring). “We would have made a lot more mistakes if we went right into the restaurant.”

Then again, as Muir says, “The economics of a food truck are pretty awful.” Dishes need to be priced low to meet customer expectations, and truck owners have to pay the city to use its designated parking spaces—which Muir says can cost $1,800 a month—and to rent a shared commissary kitchen space to prepare the food that’s loaded onto the trucks each day. Then there are the propane and gas costs, daily cleanings, and lost revenue during bad weather. Traditional restaurants may cost more to open than their food-truck counterparts, but they also offer a more-predictable operating experience. That’s why it can be a particularly good idea to combine the two: A restaurant can double as a prep station for existing trucks, making running the trucks easier and more profitable.

Although many proprietors are seeking out restaurants to extend their brand, one thing is certain—we wouldn’t have such creative concepts on the horizon if it weren’t for food trucks taking the temperature of diners. “If you have something really different,” Muir says, “and don’t have the confidence or don’t know if it will work, [trucks] can be a really great way to evolve.”