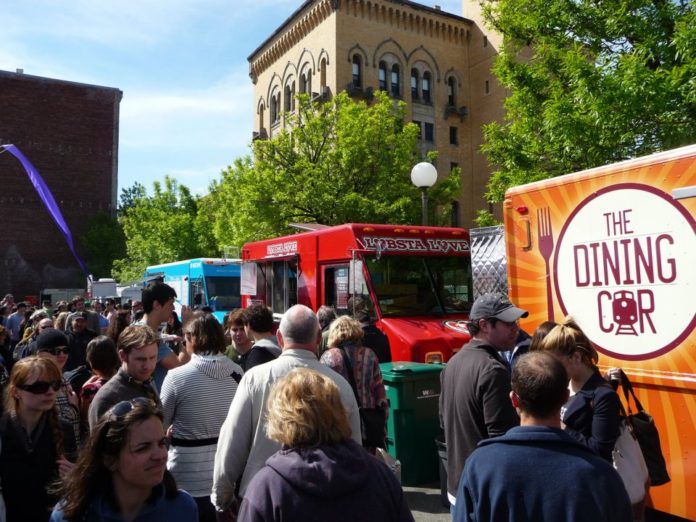 With the sun shining and spring (seemingly) in full gear, Boston’s food trucks are revving their engines, prepared to take to the streets for the spring and summer seasons. April 1st marks the return of the full fleet of Boston’s mobile eateries, to be parked everywhere from Dewey Square to Copley.

For the 2013 program, the city has approved 56 food trucks for operation via the annual food truck lottery, which took place back in January. The 56 trucks are now nearly four times the number of trucks that started when the pilot program launched in 2011, representing grub for every taste bud, from Asian street food to gooey American burgers.

The city program will allow the food trucks to park at 18 public sites, including three cluster sites, consisting of two or three trucks at a time. New this year are sites in East Boston, Charlestown and Dudley Square.

From an earlier BostInno post, here are some new food trucks coming to Boston this spring:

In addition to the city program, the Rose Kennedy Greenway Conservancy runs a separate food truck program called Greenway Mobile Eats. Their 2013 season, also launching today, boasts a line-up of 22 trucks and bikes, eight of which are new this year, including the Area Four, the Coffee Trike and Seta’s. The vendors will be stationed at six locations across the Greenway.

Given those numbers, it’s safe to say that food trucks are here to stay.

So, get out there, enjoy the sunshine and eat some food from a truck. Click here for the city schedule and here for the Greenway schedule.