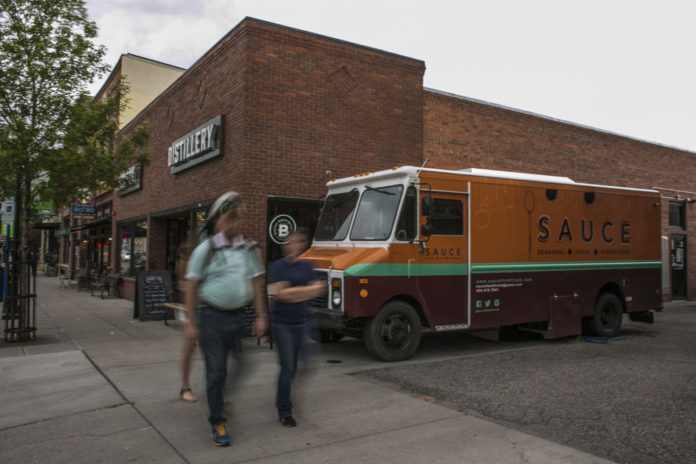 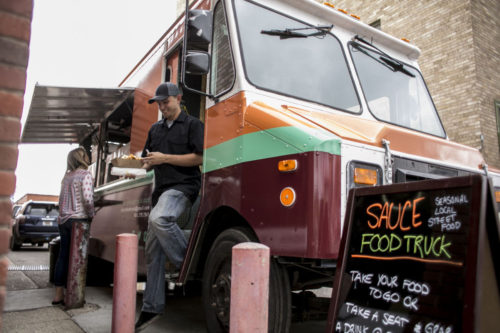 Visitors to downtown Bozeman may have noticed a new arrival in the area: a bright orange and green truck parked in the alley next to Bozeman Spirits Distillery.

The vehicle is a food truck by the name of Sauce.

A collaboration between 31-year-old Ben Metier and his fiancee Emily Pierson, 28, Sauce began serving its farm-to-table fare — including a vegetarian banh mi and pork chili smothered fries — on May 2.

“I’m in awe still. It’s only been a month and right now we’re keeping our nose down and want to make the people of Bozeman happy,” said Metier.

A native of Fort Dodge, Iowa, Metier “always wanted to move out to the mountains.” He settled on Boulder, Colorado, where he met Pierson and graduated from culinary school.

Pierson was accepted to a graduate program at Montana State University and the two moved to Bozeman, where Metier scored a job as a chef at Sola Cafe.

But running a food truck had been Metier’s dream since culinary school, so when an opportunity arose to purchase the old Amok truck, he jumped at it.

“Owning a restaurant is a big investment in money and time. We fish a bunch, hunt a bunch and having a food truck allows him to do that more than a brick-and-mortar restaurant,” said Pierson.

Through mutual friends, the two connected with the owners of Bozeman Spirits and worked out an agreement to allow the truck to park on distillery property. As part of the arrangement, patrons can order red curry shrimp egg rolls or a skirt steak taco straight from the bar. 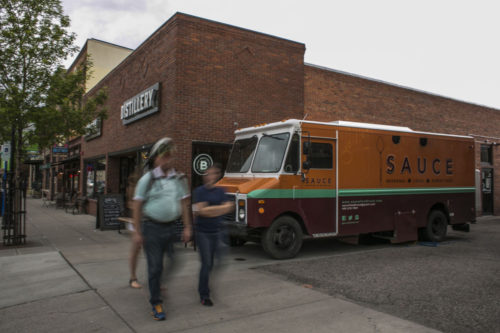 Unlike most food trucks, Sauce won’t move around much, but Metier said he hopes to eventually add catering to the mix.

“They’ve been kind enough to put me here, so we’re going to be here for a while,” he said. “I couldn’t be happier. This is the best place ever.”

Sauce is one of several new mobile vendors in the valley, prompting questions about how the vehicles can coexist with brick-and-mortar establishments.

Bozeman has no laws regulating food trucks. After obtaining a $75 business license and a health inspection, the trucks are free to move about as they please, provided they abide by public and private parking rules.

The city tried to tackle the issue in 2012, forming a group to provide recommendations for regulation. Discussions eventually fizzled and no ordinance was passed.

Working with city development groups, Naumann came up with a framework that includes a $150 annual permit for food trucks. In addition to obeying all parking laws, food trucks would be prohibited from operating on any heavily trafficked roads, including Main Street, Mendenhall Street and Babcock Street, or within 50 feet of a restaurant.

“The reality is that there needs to be some sort of regulations to make sure that the mobile vending doesn’t infringe upon all the brick-and-mortar retail and restaurant businesses that we have downtown,” said Naumann.

Naumann presented the framework to the city in March, and commissioners plan to take up the issue at a June 27 meeting.

“My intention is to get to it. It’s been hanging out there for a while. There isn’t any silver-bullet solution, but we’re going to work our way through it,” said Mayor Carson Taylor. “As the mayor, I want to have some discussion this summer so we don’t go into next summer without having discussed it.”

“There’s no promise that when the commission takes it up, we will magically come up with a solution that we all like and that will end it,” he said.

“It’s not that we’re uninterested in this; the (other issues) are just bigger and more important,” he said. “From a community perspective we have competing priorities.”

But Mehl admitted that Bozeman is “behind the curve” on developing rules for the city’s more than a dozen mobile vendors.