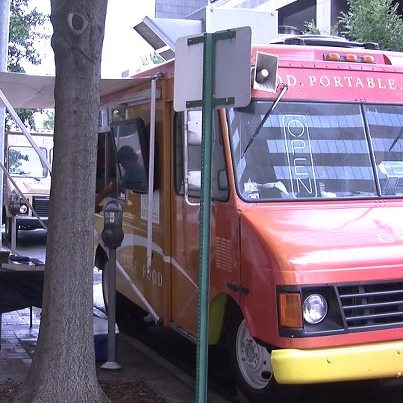 BIRMINGHAM METRO – Michael Brandon, chef and partner with Spoonfed Grill, has brought his food truck to downtown Birmingham for the last three years.

“As far as being a part of downtown Birmingham we’re as entrenched as anybody can be,” says Brandon. “We have a good customer base here, so we’ve sort of made this ‘our spot’ in Birmingham right now.

That ‘spot’ is at the corner of North 20th street, right across from Regions Center.

During lunch hours, his truck sees dozens of patrons from downtown businesses.

“Food trucks and any type of restaurant in general is driven by foot traffic. At least in this part of the city of Birmingham,” he says.

Brandon, as well as other food truck vendors are coming under fire from downtown restaurants for parking too close to their establishments. Maintaining the trucks take away from their business.

Brandon says, “While we can understand their concerns, we feel our products differ from the ones we’re parking near.”

Several restaurants Focus at Four reached out to would not comment on the issue.

“(The trucks) were occupying city ‘rights of way’, city streets, city parking spaces and in some cases they were driving up on city sidewalks and setting up for business,” says Abbott. “So (council) began to see that it was important for us to have an ordinance.”

Ultimately, Abbott says it’s important to not only have an ordinance, but to be fair to all parties involved in downtown.

Brandon agrees with that notion by saying, “We are not afraid of the rules, we just want them to be fair.”

The public hearing before the full council is set for late August, where food truck vendors, restaurants and the public will all have a chance to weigh in.