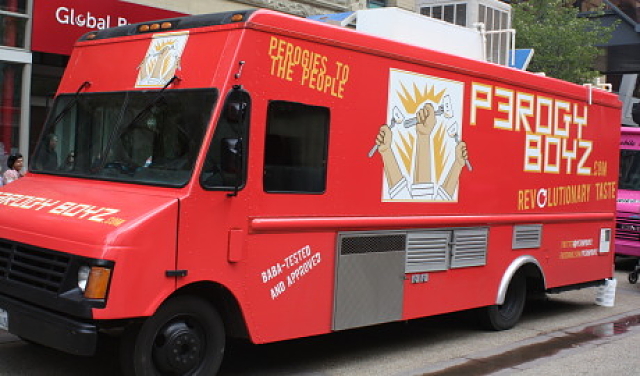 My mother told me very specifically to never take food from a man in a van.

Which is why I had no problem taking fries from Ms. Lani and the Fries and Dolls food truck.

I then proceeded to more precisely disobey my mother by taking food from men in three other trucks.

A veritable convoy descended on the core to satiate a bevy of voracious eaters who came for sustenance and to welcome, with great fanfare, food trucks to Calgary’s culinary scene. This was Taste the Trucks, an introduction to Calgary’s newest food sensation – the food truck.

{The crowd was easily into the thousands. If you tried to go and were deterred make sure you try to find the trucks again – this format was a one-time thing}

I went to Taste the Trucks with the noble intent of sampling the fare from each of the seven trucks that lined Stephen Ave – for you the reader, of course – but was fully thwarted by a Red Mile-esque crowd. If these trucks were once an underground phenomena they are now officially above ground and likely to be paving a street near you with grease and scrumtrelescent joy soon.

The Charcut truck, and chef Connie DeSousa (apparently I’m suppose to know that name from TV?), served the Alley burger to a perpetually snaking line of hundreds and Perogy Boyz sold out in two hours. Clearly the word is out about them, so I tried some other stuff:

Gelato is said to have birthed ice cream. That is to say that it came first. It’s also less fatty. That’s probably why all the people in those movies about ancient Rome are so skinny.

Get skinny by eating lots of Fiasco when they park outside your front door. I had the Blackberry and Limonata and both were outstanding – I think all the fat in ice cream gets in the way of the flavor as this stuff was potent goodness.

French fries are so done. It’s a good thing, then, that retro is super hot right now.  The gals, or should I say Dolls, serve up all kinds of specialty fries wearing vintage polka dot dresses that match their hot pink van in era only.

Hey pimply kid behind the counter at New York Fries – eat your heart out. That’s what I did with their truffle oil infused fritters topped with Grana Padano Parmesan. Isn’t it absurd what happens to a food when you put cheese on it?

{Cheese on fries? Maybe someone should tell the French… oh wait…}

If Superman has kryptonite I have BBQ. I was prepared to decimate the contents of this truck like a rig-drivin’ tailgating southern redneck hillbilly but alas my dreams were dashed by the aforementioned crowds. The menu was on its last legs and only one item was still available.

I got my paws around a small pulled pork sandwich which seemed to be crying for more of what was probably the dregs of the sauce. I’ve heard good things about JoJo’s so I didn’t call this the final test.

No BBQ joint escapes, JoJo. I’ll be back. You just be ready!

I ordered the “mixed taco” dish consisting of three of the most flavourful tacos I’ve ever had. The highlight was the chorizo sausage taco but the pork and greens was also mindblowingly tasty.

{While a taco with pineapple, as you’ll see on the right, is a travesty of Mexican heritage it was freaking delicious which supersedes the value of any culture}

After waiting in line for over an hour  I received the very last three tacos served. The food might have been good but the distinct taste of victory probably helped.

I didn’t get the big deal at first but after tasting the food I think I understand – Mobile food is not fast food, this is quick and seriously high quality food that could easily grace the tables of a restaurant. Sure the trucks are a bit of a gimmick but I promise you will be rewarded for tracking one down.

Check out http://www.yycfoodtrucks.com to get more info on a food truck coming to a curb near you.

P.S. If you’re interested in taking the health option up a notch stay tuned for my review of The Coup restaurant coming soon.