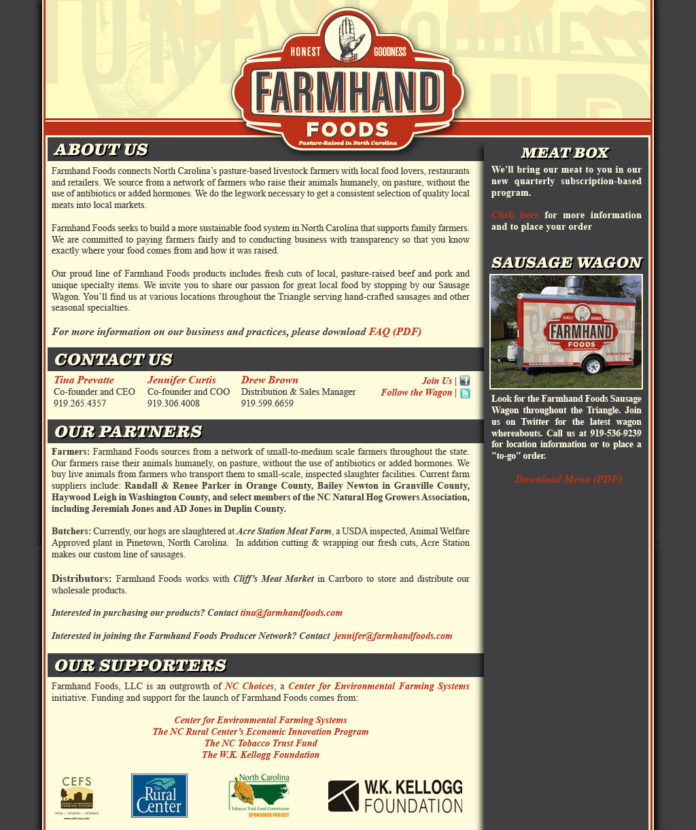 In the lineup of classic Carolina foods, one is suffering from a major public relations problem:

Pick up a jar and just try to figure out what it is. Are those bits of green tomato? And cabbage? The taste is both sweet and hot, puckery with vinegar and crunchier than relish. The color might be yellow or red, or green.

We can’t even figure out how to spell it. It turns up in books as chow chow, chowchow and “chow-chow: see ‘piccalilli.'”

Try looking it up on the Internet and you’ll end up wading through links about the dog breed.

Is this any way to treat what Durham chef Drew Brown of Farmhand Foods calls “the indigenous North Carolina pickle”?

When Brown came to North Carolina from Ohio, he thought chowchow looked kind of strange. But as a chef, he appreciated how adding something pickled or acidic brings out the flavors of foods.

“It’s why Asian food or Latin food tastes so interesting,” he says.

Maybe that’s what chowchow needs – a sexier name. We should call it Southern kimchi.

A garden of leftovers

In the South, chowchow turns up wherever the food has a country feel. It might dress up a simple plate of pinto beans or greens, or top a serving of black-eyed peas. It gets spooned on hot dogs and hamburgers. We’ve seen it mixed into deviled eggs and even spread on Reuben sandwiches to make them Southern-style.

Virginia Hoyle of Vale has been selling Southern-style canned goods at the Charlotte Regional Farmers Market since 1986. Hoyle, 71, grew up in a farming family in Lincoln County, where chowchow was a staple at every meal.

“We had it setting on the table, and I wouldn’t touch it,” she says. “I was grown before I developed a taste for it.”

Amy Sugg, who sells her Bonlee Grown line of canned goods at the Durham Farmers Market, remembers her grandmother making chowchow. But when she grew up in Wilmington, her mother never canned.

Twenty years ago, Sugg, 56, and her husband, Ray, moved to a farm in the Chatham County community of Bonlee.

“A country lady took me aside and said, ‘You’re in the country now, girl. We have big gardens and we can. Nothing goes to waste.’ “

In the country, chowchow was the ultimate “nothing goes to waste” food. You made it at the end of the season, to use up what was left in your garden before frost hit. Some sources even call it “End of the Season Relish.”

Traditionally, it always has green tomatoes, cabbage, peppers and onion. But other odds and ends can go in the mix: carrots, cauliflower, zucchini, even chopped-up green beans.

“Every chowchow is going to be totally different,” Sugg says. Hers often varies in color according to what peppers she has. She makes the liquid from vinegar, pickling spices, celery seed, turmeric, ground mustard, mustard seed and ground ginger.

Relished in the North

Stories about the name are as varied as the ingredients. Virginia Hoyle repeats a story she heard growing up:

“Up in the mountains, they call it piccalilli. ‘Cause they’d run out and pick a li’l this and a li’l that. Down here, we call it chowchow because we go gather all the food to eat before the frost.”

Actually, piccalilli is an old English variant on the word pickle. And chowchow? Despite tales that the name was Chinese or even Indian, it’s more likely that it came from “chou,” the French word for cabbage.

Although cabbage was always part of the chowchow tradition, young chefs who are discovering it these days are changing the ingredients while focusing on the sweet/hot/tart flavor. At Tupelo Honey Café in Asheville, chef Brian Sonoskus makes a Cherry Apple Chowchow with dried cherries, dried apples, red cabbage, onion, mustard and orange marmalade.

In Durham, the Farmhand Foods food truck sells sausages at locations like Fullsteam Brewing. Drew Brown wanted something that would bring out the fennel seed flavor in his Italian sausage, so he came up with fennel chowchow, replacing the cabbage with grated raw fennel.

“People really seem to like it,” he says. As a chef, he appreciates how tartness – a squirt of lemon or a splash of vinegar – can make food even better.

Maybe chowchow’s changeable nature will bring it a whole new generation of fans. Another chef-friend of Brown’s moved to Chicago to work in fine dining. He has reported seeing chowchow at high-end restaurants there.

“Southern food, like pimento cheese, has become trendy,” Brown says. “Even chowchow is making it outside North Carolina.”

GRATE the tomatoes, onion and bell peppers on a box grater or in a good processor using the grating disk.

TRANSFER the vegetables to a large nonaluminum saucepan and add the sugar, vinegar, chile peppers, salt, mustard seeds, celery seeds, pickling spices and cloves, and stir to mix. Bring to a low boil over medium heat, skimming the rising foam as needed. Cook, stirring often, until thick, about 45 minutes. Remove from heat.

FOR REFRIGERATOR RELISH: Cool slightly and refrigerate in airtight containers up to 2 months.

FOR PRESERVED RELISH: Sterilize 4 (1-pint) canning jars. Pack hot relish into hot jars, leaving about 1/2 inch headspace. Cover and process in a hot water bath (see related story) for 20 minutes. Remove from boiling water and cool to room temperature. Check the seals and store in a cool, dark place until ready to serve, or up to six months. Refrigerate after opening.

COMBINE all ingredients in a heavy saucepan and bring to a boil. Reduce heat and simmer about 25 minutes, or until liquid evaporates by a half. Refrigerate overnight in an airtight container. Will keep up to 1 week.