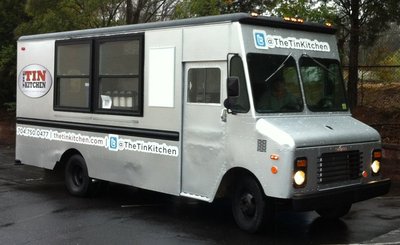 CHARLOTTE, N.C.–David Stuck fired up the grill inside The Tin Kitchen. It was another day of work for the Executive Chef who fled corporate America for the confines of his gourmet food truck just seven months ago. “There are some benefits and some challenges. Each week is different,” he said.

But now, the titan of tacos is facing another test.

The North Carolina Commission for Public Health could pass new rules requiring mobile food vendors to post sanitation grade cards. Stuck isn’t concerned. “I think from a consumer standpoint it would give confidence to the consumer having that score posted, knowing that it’s safe,” said Stuck.

Emma Merisier is the Southern Cake Queen. The former corporate soldier now makes cupcakes full time. She has no problem with the new grade cards.

“It’s not your typical roach coach. A clean environment where  you can enjoy great food in a clean establishment is just like a restaurant,” said Merisier.

Customers like the idea of the numbered scores and matching letter grades.

“It would be cool and make decision easier on where to get my food,” said Matthews resident Emma Campagna.

“I think that if I saw that A rating on there, I think that would make me think twice that they are just as clean or they have high standards,” said Mount Holly Resident Sarah Melton.

The North Carolina Commission for Public Health’s next meeting is on August 15th.
The new rules could take effect in September.