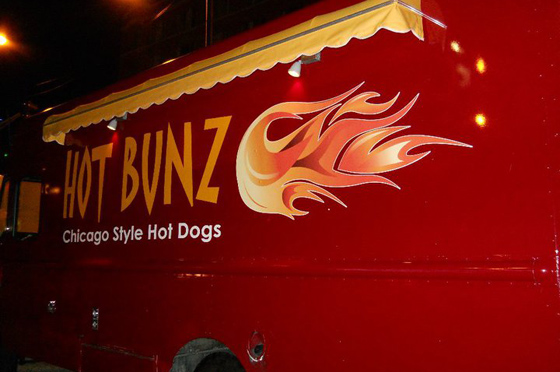 As we’ve mentioned time and time again, Chicago has some of the most infuriatingly strict food truck laws in the nation. Chefs are prevented from both cooking or even assembling cooked food on the truck. Most food trucks roaming around the city have to cook and package everything in a licensed kitchen, only using the truck as a way of distributing the food to people. Clever chefs have dealt with the restrictions by serving food that travels well (cupcakes and mac and cheese are perfect examples). But there is a strange oasis in Humboldt Park where Puerto Rican trucks like La Esquina del Sabor have been operating without the usual restrictions for years. On a recent drive through the park we noticed a new kid on the scene called Hot Bunz, which is serving Chicago-style hot dogs straight from the truck.

As you can imagine, a fully loaded Chicago-style hot dog wouldn’t exactly travel well all wrapped up, and that explains why no one else has tried to do this before. Hot Bunz is using Vienna Beef hot dogs and sausages, and assembling everything to order. There are also a few sandwiches, which aren’t listed on the official menu. Apparently it launched way back in September, closed over the winter, and just reappeared a couple weeks ago.

The truck seems to be spending most of its time in the southern portion of the park, just north of Division and N. Humboldt Blvd, but it has also popped up at other locations around Logan Square. While it doesn’t update its status too often, the food truck occasionally announces its location on Facebook and Twitter. Check out its menu below.