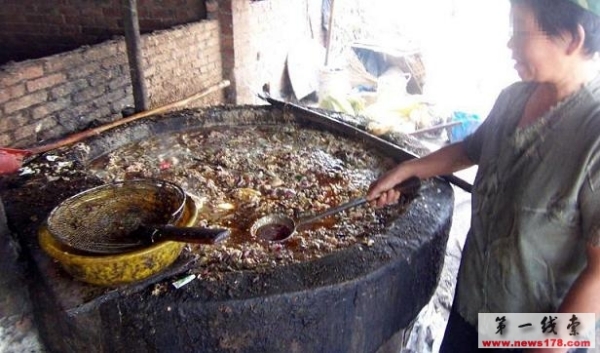 Slop oil is “refined” from slop or swill, which is the leftover “food” that people and restaurants throw away. Another name is “地沟油”,  “gutter oil” or “drainage oil”, because the oil is recovered from the sewer drains coming out of restaurants. Usually, slop or swill is fed to pigs but some unscrupulous people will gather the slop and “recycle” the oil in the slop to sell as cooking oil. Of course, this cooking oil is known as “slop oil” and it is cheaper than fresh cooking oil. Many street vendors who cook snacks (especially fried foods) may use this “slop oil” to save money and keep their costs low.

Why has harmful slop oil once again flooded Wuhan?

(The bold black-hearted boss even guarantees: “Slop oil is safe to eat”). In March of this year, the internet exposed the Wuhan slop oil public health safety incident (refer to relevant report: “My god! Malicious Wuhan oil factories selling slop oil guarantee safe to eat“). The problem attracted heated discussion and criticism from netizens around the country. The problem also very quickly attracted the Wuhan city government’s attention and the relevant department committed additional people and man hours, conducting a city-wide special rectification operation that lasted over a month and investigated a large amount of slop oil (refer to relevant report: “Wuhan emergency seige of slop oil scenes (follow-up report)“). Yet, right when the people feel they can relax, who would have thought that illegal refining of slop oil would stage a comeback, and flood Wuhan.

Wang Hao Feng Focus once again conducted an undercover investigation, witnessing large numbers of hideouts for the illegal refining of slop oil, with the hideouts on one street in the HongShan district being so numerous as to be innumerable; when it comes to refining slop oil, there are no procedures, and whoever offers the highest price is whoever it will be sold to.

This quickly, the problem has resurged. There are city residents who say this is not strange, is common, and is expected. With the supervision of some supervisory departments these days being “a gust of wind”, a problem is exposed, the leadership [government officials] will make some comments, there will be some on-site investigations, but they will see how the wind blows as they investigate and if no one continues asking and no one is after their positions/jobs, the investigations will stop there. Then, they will continue their own (tenured) lives of officialdom. [They will] let the same old problems wait until the next time they are exposed before saying anything. If they are not exposed, [they] won’t say anything.