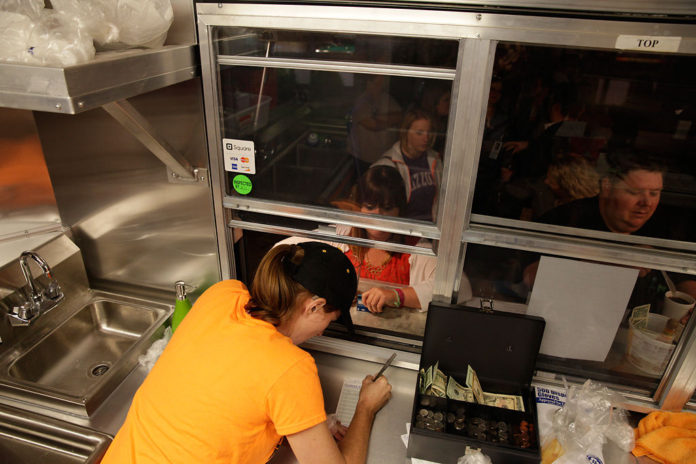 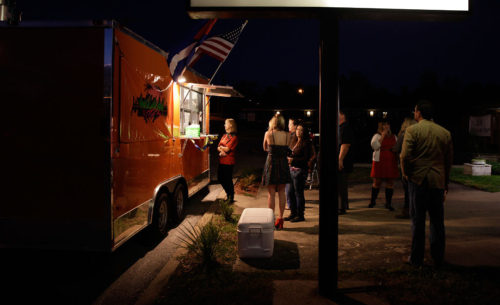 COLUMBIA — Lexi Price tries to keep pace with the orders as they pile up around her.

Standing behind the service window, she hands out Cuban sandwiches, croquetas and churros in paper boats to the line outside her food truck.

Calmly, but deliberately, she orchestrates her two helpers in the kitchen: Sandwiches must be on the press while the croquettas are frying so they can all be ready and hot at the same time.

Someone needs to buy more milk for the coffee. Please set a trash can outside.

As the volume of orders increases, Price continues to greet her waiting customers with a broad smile. Despite the pressure, she wants to create a personal experience for each of them.

“Hi guys, welcome to Miami Bites. What can I get for you today?” she asks.

On a sunny Sunday in late September, Price and three members of her family have parked their new food truck in a small lot next to the Tiger Club on Business Loop 70. Miami Bites, her business with partner Michelle Huff, sells traditional Cuban food out of a narrow orange truck.

So far, Price has driven the truck to various locations once or twice a week. This is serious business for her, and she wants to become more visible by the end of the year.

“It’s a weird new thing, but I like being my own boss,” she said. “I don’t ever want to work for anybody ever again.”

When Price and her family moved from Miami to Columbia in 2002, they quickly noticed the absence of Cuban food.

“One of the biggest changes of scenery was the food,” she said. “We grew up with it, so not having it was rough.”

When her mother mentioned the possibility of a Cuban food truck last year, Price immediately jumped at the idea.

“I was just like, ‘That would be so much fun,’” she said. “Food trucks are so trendy, and I was really excited about this.”

After a year of deliberation, Huff finally pushed Price to leave her day job and pursue the idea.

“When she said it was something that she wanted, I focused on making sure that we put everything in place to make this happen for her.”

They located SLE Equipment, an outdoor equipment company in Tennessee that customized a 16-foot concession trailer into a big fluorescent truck.

Next, they outfitted the interior with a six-burner stove, refrigerator-freezer combo, fryer, three sinks and two panini presses.

Then Price had to learn how to cook.

Growing up with two parents who loved cooking, she never needed to learn to cook, nor did she really have the desire to do so. Now, she not only needs to cook, but she must locate reliable sources for the authentic ingredients needed to maintain the menu. Tracking down the right breads and spices for real Cuban recipes can be difficult in the Midwest, she said.

“Lexi wants it to be as authentic as possible, but we’re in the Midwest, and we don’t have a lot of the things here that we could rely on if we were in Miami,” Huff said.

“I call our food Cuban-inspired.”

The most popular item on the menu is the Cuban sandwich, which layers a Cuban bun with a slice of Black Forest ham, Swiss cheese, pickles, mustard and shredded pork marinated in mojo sauce.

“Traditional Cuban sandwiches are always made with sliced pork, but Lexi came up with doing a pulled-pork, marinated-type thing,” said her mother, Ali. “I think it’s far superior.”

Another popular item is the croquetta — slices of ham and mozzarella cheese rolled, covered in flour and egg, then deep fried.

Instead of hiring a paid staff, Price relies on help from her family members and friends.

“We’re just fortunate that we have connections and that we have people who are willing to volunteer their time and want to come help us,” she said.

“It is really a family business right now.”

After spending months putting together the truck, creating a menu and establishing a process of cooking and serving, Price and her partner opened the truck to the public on Sept. 9.

That evening, a steady crowd came to the Missouri United Methodist Church to support the business, which Price attributes to her mother’s ability to network with the community.

“Thanks to my mom being the Cuban woman that she is and spreading the word around, they’re all on our side,” she said.

Then, the generator died, forcing the truck to close early. Instead of turning the crowd away, however, her father handed out all the extra food to customers in line.

“It was the smartest thing,” Price said. “It was the least we could do for the customers for coming out and waiting in line.”

She decided the crew needed a short break to find a new generator, add items to the menu and organize the kitchen. Less than two weeks later on Sept. 20, the truck reopened with a far more successful outcome.

Price welcomed the customers, asked their names, where they were from and what they thought of the food.

“She could strike up a conversation with a stranger and then that person wouldn’t be a stranger anymore,” Huff said. “I think that’s just a natural-born talent that she has that this truck gives her the opportunity to show.”

Since then, the food truck has been generating buzz.

“I mean we’re already booking for Christmas parties, which is something I’m finding a little crazy,” Price said.

Before moving to Columbia in 2002, Price and her family lived in Miami, her mother’s hometown. Price’s mother says her Cuban heritage has always been an important part of her life, one she passed on to her kids.

“Cuban culture is a little bit more loud and inclusive, in that if you’re invited over to someone’s house, you bring your whole family and everyone’s there,” she said.

While her Cuban heritage was equally important, Price said she did not identify with the Miami culture.

“I felt very different from my peers, I felt very out of my comfort zone,” she said.

“Miami can be sort of cutting edge and cool, and it has South Beach and fashion, but it’s just not Lexi,” her mother said.

When Price reached sixth grade, her mother realized that Miami wasn’t where she wanted to raise her kids.

After making a decision to move to Columbia, the adjustment was difficult, especially for Price’s mother.

“I’m not a fan of winter at all, and I missed the ocean tremendously,” she said. “I hated the feeling of being landlocked.”

But over time, the family found a strong community and a comfortable quality of life in Columbia that made their transition easier.

When she was 15, Price told her parents that she was a lesbian. Both told her that all they cared about was her happiness.

“I was kind of in disbelief,” Price said. “I was thinking they were going to be like ‘I don’t know about this,’ but they were OK with it.”

She met Huff in 2012 on the dance floor at the now-closed SoCo Club. The two say there was an instant connection, and they soon started dating.

Huff had been married with an 8-year-old son, Max. Although she said she didn’t want to involve her son in her relationship with Price at first, she soon was comfortable letting Price into the family.

“I only get him part-time, so that time I do have with him, I tend to be a little selfish and I like to have him to myself,” Huff said. “But he really took to Lexi right away and she took to him, too.”

Huff has maintained her 9-to-5 job with ReverseMortgages.com Inc., while Price concentrates on the expanding food business.

“Once we have more profit coming in and we’re in a more positive profit margin, I think I’d like to talk about bringing in a paid staff,” Price said.

She acknowledges there is a lot of work to be done, but Price cannot help but grin as she considers the future.

“There is that Cuban culture there that is a part of me that I want to bring here,” she said. “It’s who I am, and I’m excited to share that part of me with Columbia.”