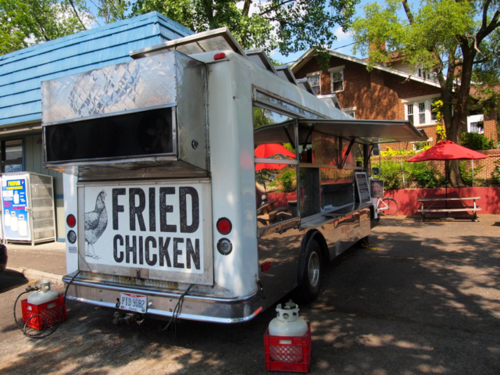 Today there is a food truck movement sweeping across the United States.

Simply put, a food truck is a mini, mobile restaurant. Some have fixed positions that they serve from daily, while others change locations based on the day, time, or even season. Food trucks usually specialize in one type/genre of food, but those genres can take on just about any form or interpretation. Vietnamese-fusion. Down-home barbecue. Tacos. Falafel. Even grilled cheese.

These kitchens on wheels are popping up in every corner of the country – including in Columbus, Ohio. 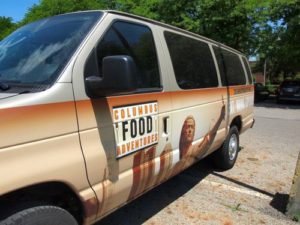 Considering how popular food trucks have become in the past 3-5 years (yes, even in Ohio – there are at least 100 food trucks in Columbus alone!), I decided to give the Food Truck Tour a try. 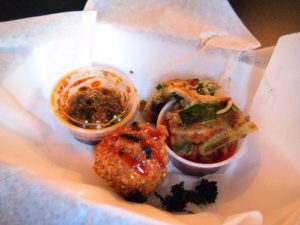 The tour began at a central location near downtown Columbus, where we met guide Bethia and piled into the large van that would be our transport for the 3-hour tour.

Our first stop was at Ajumama, a Korean food truck that can usually be found outside Four String Brewing Co. on W. 6th Avenue. Ajumama does what a lot of smart food trucks do – partner with a local bar/brewery/wine shop that doesn’t have a kitchen to offer up nibbles to the customers. Ajumama serves up Korean-fusion and classic Korean fare, with dishes changing based on the season. Their most popular dish is their bulgogi cheesesteak, though we got a small tasting plate with some kimchi, a bimbim ball, and a pancake-like pajeon.

Next we were off to Challah, a farm-to-fork, Jewish-deli-style food truck that partners up with The Twisted Vine wine bar/shop on W. 5th Avenue. Here, 90 percent of their food is made on-site from scratch. We got to try a bit of chicken salad sandwich, a couple bites of a Reuben, and a delicious potato latke with sour cream.

Ray Ray’s Hog Pit was next – a barbecue staple in downtown Columbus. This food truck is found behind music venue/bar Ace of Cups on N. High Street, and is only open Friday-Sunday. It serves up arguably the best BBQ in Columbus. We tried some of its famous beef brisket (which is smoked for 14 hours before being served), a St. Louis-style rib, jerk chicken, and some southern-style greens. 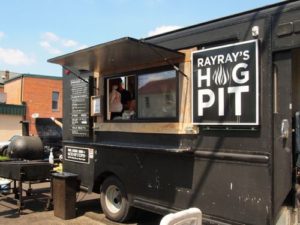 Next up was my favorite stop of the day: Mya’s. This food truck is in a seemingly odd location (alongside a food mart on N. High Street), but serves up some of the best fried chicken I have had the pleasure of eating. Here we sampled some shallow-fried buttermilk-battered chicken, mashed potatoes and gravy, and buttery biscuits. Like Ray Ray’s, Mya’s is only open on weekends. 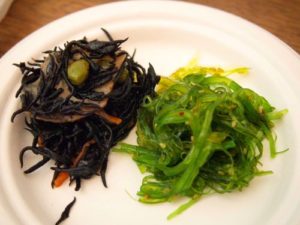 If you’re looking for a true taste of Columbus (or, at least, a taste of its best food trucks), this tour is a great option.