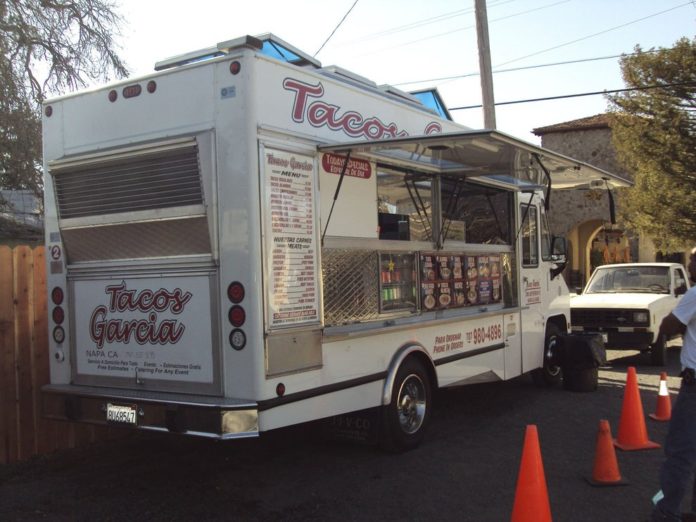 The news came via e-mail, straight from tiny Yountville in the Napa Valley: “The talk of the town is the Michelin Guide’s 2011 awards, sharpening Yountville’s culinary edge with six coveted stars within six walking blocks.”

Very impressive, given that the guide’s star system (one to three stars) has a measurable impact on a restaurant’s success. Stars can make a chef’s reputation – and make getting reservations a challenge. Conversely, the removal of stars can mean calamity.

As for Yountville, Michelin stars for 2011 went to the French Laundry (three), étoile at the Domaine Chandon winery (one), Bouchon (one) and Redd (one). Of course, other Napa Valley restaurants boast stars and other honors of their own.

Shortly after the announcement, somebody brought up the subject of Tacos Garcia. Oh, yeah … it’s a taco truck licensed by the town of Yountville in July to set up and serve food in the parking lot alongside Pancha’s dive bar on Washington Street, the main drag.

What a delicious concept: a taco truck serving cheap eats in a town “that boasts the largest concentration of Michelin stars per capita on the planet.”

Hmmm … what would happen if I asked the executive chef of one of those star-winning restaurants to be my lunch pal at Tacos Garcia?

We’d heard how the food truck-bar scenario works: Customers drive into the lot and park, then order lunch off the truck, take it into Pancha’s, order a beer or whatever, and nosh at the bar or a table.

Obviously, that’s a far-less-costly and quicker lunch than the white-tablecloth alternatives nearby, and locals – from vintners and politicians to laborers and merchants – flock to the truck, mostly for takeout.

It’s an ideal destination for Sacramentans on casual day trips who don’t want a two-hour lunch.

The dishes are made to order from handed-down family recipes, said Libeth Garcia, daughter of owner Gabriel Garcia, who was in Mexico when I phoned.

And so it was that Perry Hoffman came to be standing with fellow lunch pal Bob Pinkerton and me in the gravel parking lot behind Pancha’s, chatting and appreciating the great aromas wafting from the taco truck.

Perry, 27, is the executive chef at étoile. Bob, who lives in Sacramento, retired from the state Franchise Tax Board after 37 years.

At the time of our visit, Perry and his lieutenants were deep into rewriting étoile’s menu in preparation for spring, and he spoke excitedly about English peas, Delta asparagus and edible greens. Bob, who reads 55 magazines a month, is on a continuing quest for the perfect chicken-fried steak.

Perry is a Napa Valley native who learned to cook in some of the finest kitchens in Northern California.

“I was lucky – a lot of great chefs took me under their wings,” he said.

His maternal grandparents owned the French Laundry for years.

Later, they sold it to über-chef Thomas Keller, who still runs it.

Bob, for his part, recalled attending the Tipton Pork Festival in Indiana, where his favorite dish was the pork chop on a stick.

“I bought two of them to eat on the plane on the way home,” he said.

At the taco truck window, we ordered a pile of fragrant tacos stuffed with variations of high-quality pork, beef, chicken and chorizo.

“I like the way they double up the tortillas,” Perry said. The generous, fresh toppings included onion, sweet bell pepper, cilantro, tomatillo salsa (Perry: “I’m a sucker for anything with tomatillos”), cabbage, avocado, tomato, spices, herbs.

How were they? Crunchy, soft, hot, mild, wet, savory, smoky, crisp, chewy. As we ate, juices trickled down our hands and chins while sighs of pleasure and grunts of satisfaction filled the soundtrack.

The fish burrito was over-the-top good. The fresh, chewy tortilla (“It’s perfect”) bulged with chewy rice damp with chipotle sauce, a mound of thick crème fraîche (“I wouldn’t be surprised if this is homemade”) and moist, perfectly cooked salmon (“What makes it is the fish”).

Perry continued his running commentary as we three finished the feast: “This one has great spice and crunch. … The beef on this one is really fresh. … This seasoning couldn’t be better.”

“I probably eat tacos more than any other meal during the day because they’re quick,” Perry said, wiping his hands with napkins. “There are a lot of food trucks in the valley, but I’d say this one is in the top three.”

For our lunch, we sat on wood benches around a tree stump in the parking lot, mostly because Pancha’s is permeated with an odor of stale cigarette smoke that kept us out. That didn’t hinder the 20 other people drinking at the bar, though.

After we ate, it was time to walk off lunch. Destination: the Bouchon Bakery. Turned out the croissants are the best outside of France.

In conjunction with the Oxbow Public Market, a caravan of food trucks will gather in Napa to sell their goods – from dim sum and crepes to hot dogs and rotisseried chicken – from 5 p.m. to midnight on the first Friday of each month, at least through the summer.

They will set up at First and McKinstry streets. The next event is March 4.