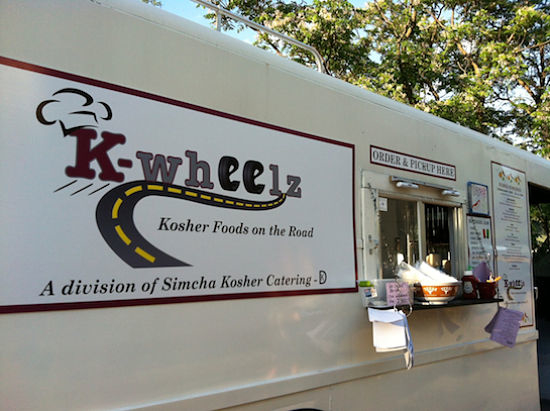 You finally have a decent place to take the Jewish grandmother in your life without sacrificing your coolness, thanks to Dallas’ newest food truck: K-Wheelz, a new kosher food truck by Dallas-based Simcha Catering.

Simcha specializes in a large array of kosher platters for anything from corporate events, Shabbos dinner, Passover and the like. K-Wheelz set out on its maiden voyage Tuesday night at Chabad Dallas and according to the Simcha rep I spoke to had quite a turn out. Last night, K-Wheelz rolled up to Shaare Tefilla on Churchill and Preston.

I stopped by around 7 to check it out and found a no-frills truck serving giant burritos, all of whom request that you call them by their proper name: Burrito Schmurito! Complementing the sweet scene were small groups of who were likely members of the Shaare Tefilla Congregation. They were all gathered in the synagogue’s back parking lot, adding to a slowly growing line of hungry patrons.

Even from the very back of the L-shaped parking lot, the smells were strong and enticing. Adorable children played around light posts while their parents mingled over huge tortillas stuffed with fresh, steamy ingredients in the setting Wednesday sun. Maybe it was the inherent holiness of the place, but damn was it nice to just hang out for a few minutes around good food and nice people.

The burrito menu is basic: pick your tortilla, filling, then toppings. If you’re in any way versed in kosherisms, you’re probably wondering how one can possibly enjoy a burrito without cheese, as doing the opposite would be a stark violation of kosher law. K-Wheelz is way ahead of you by offering to top your Burrito Schmurito with a pile of Daiya cheese, a dairy-free alternative used by both those keeping kosher and vegans galore. Win.

We’ll keep you posted on the K-Wheelz schedule and additions to their irresistible, kosher menu. Now call your grandmother and offer to buy her a burrito. And bring her flowers. You little bastard.