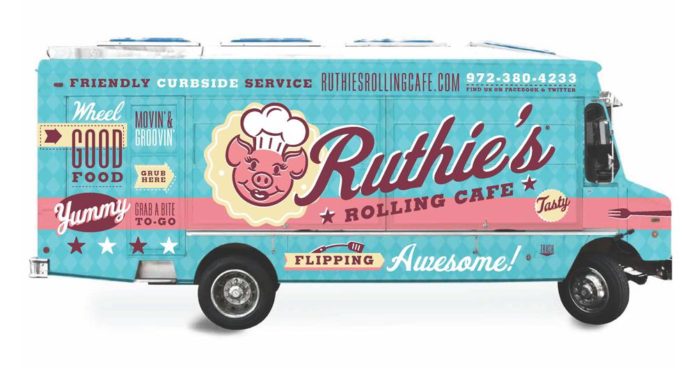 With the encouragement from customers at their staple spots in Downtown, Uptown, the Dallas Arts District and surrounding suburbs, mobile food vendors are now reaching out to the SMU campus.

“We have parked on Hillcrest and have had a positive response,” Robin Skinner, marketing director of Ruthie’s Rolling Café said. “Our next move is to park on campus in hopes of serving students late-night food.”

The truck has put itself on students’ radars with customizable “ooey-gooey” creations that sell for under $10.

Ruthie’s has been serving students on the weekends when the food truck rolls into parking lots of popular student bars, like Barley House and Twisted Root.

Skinner and her team are negotiating with SMU administrators with the hopes of obtaining permission to serve food directly on SMU property.

Food truck entrepreneurs and owners have been taking advantage of social media through Twitter and Facebook to connect with the SMU community.

Many SMU students say they want food trucks near or on campus.

“Having the convenience of food trucks serving good and affordable food within walking distance from my apartment would make living next to campus that much better,” SMU junior Garrett Ancey said.

Students leaving campus to get food late at night has always been a safety issue, and Skinner believes on-campus food trucks could be an answer to that problem.

Food trucks have been lining the streets at universities across the country, including The University of Texas at Austin, serving lines of hungry students and promoting food that is fast, cheap and delicious.

“There are food trucks all over campus that cater to students’ late night cravings,” C.J. Haynes-Dale, a former U.T. Austin student, said.

“I think they would be successful on any college campus.”

Michael Siegel, co-owner of Green House Truck, has been serving made-from-scratch food with local ingredients in the University Park area for over a year now, as well as at a few SMU on-campus events.

“There’s a need for healthy, affordable and fast food,” Siegel said. “It’s particularly important on or near a college campus.”

And with all items around $8, the food is student budget friendly.

The toughest challenge of not having a permanent location is getting the word out.

Many owners and chefs have found that the use of social media helps to attract customers.

“I can always find a food truck’s location thanks to their constant Twitter updates,” Renick Towsend, an SMU sophomore, s

Green House Truck has recently been spotted in the Bank of Texas parking lot on the corner of Hillcrest Avenue and University Boulevard.

“The food is better and cheaper than a lot of restaurants surrounding campus, but it’s timely and inconvenient chasing the trucks around DFW,” senior Mallory Olson said.

University Park and the City of Dallas have separate rules and regulations that apply to mobile trucks.

A permit, which can take up to several months to obtain, must be granted to legally sell food on the streets.

University Park grants the owner of the food truck’s desired property the right to give permission to allow the truck to park there or not.

“Allowing a food truck to park in your business’s parking lot is a great advantage for the property owner; it attracts people to your own business,” Skinner said.

Unlike businesses with a permanent location, food trucks have the advantage of packing up and leaving if their food doesn’t sell in a particular area.

According to the City of Dallas requirements for mobile food vendors, trucks are subject to many of the same regulations as restaurants, ensuring they are regularly inspected to guarantee a clean kitchen and safe food.

Following the success of Dallas’ first ever Food Truck Festival in August, held in the parking lot outside of Sigel’s on Greenville, it is clear that the public supports the trucks.