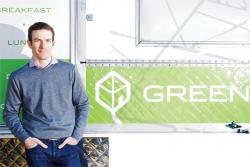 Plein-air cuisine has reached a whole new level. Say good-bye to hot dogs and pretzels, and “Well, hello!” to lentil soup, marinated flank steak on ciabatta and organic fair trade coffee—all delivered from a roaming restaurant on wheels in upscale locales around town.

In Dallas, attorney-turned-restaurateur Michael Siegel is giving the concept of mobile meal-taking a spin. He’s hired chef Ben Hutchison to run Green House, a bright green truck specializing in wholesome, healthy, sophisticated food—soups, salads, sandwiches and entrées like salmon and steak—all for 10 bucks or less. “There’s no butter, lard or anything fried,” explains Siegel, whose Green Truck will serve breakfast and lunch daily. “The goal is to provide a great meal as inexpensively as possible.”

Hutchison is an accomplished chef who’s worked at Aspen’s Little Nell and with Stephan Pyles at the former Routh Street Café. For the past 15 years, Hutchison has been a chef at Food Company, a highly regarded Dallas caterer. For now, Siegel and Hutchison are among the few higher-end food truck entrepreneurs in the region. They are continuing to refine locations and seek necessary permits with the City of Dallas, “but we will be on Dragon Street and in Oak Cliff for sure. We’re figuring out the best spot for the downtown market and trying to accommodate the requests we have been receiving.  We have also started taking bookings for catered parties,” Siegel says.

Other truck vendors include:
Dimples Cupcakes in Plano and Jay Jerrier’s pizzas from his Il Cane Rosso wood-fired pizza oven on wheels; both announce ever-changing locations on Twitter.

Chefs Jeana Johnson and Colleen O’Hare, who own Good2Go Tacos in East Dallas, are giving the concept a go; they’re rehabbing a 3-wheeled, 1960s mail cart as a mobile taco stand. “I get asked every day about our progress on the taco truck, so we’ve got to try it,” says Johnson, “It’ll be cheaper than building out a second location, but unlike Austin, Dallas doesn’t really have a point of reference for this mobile stuff.”

Ojos Locos, a new sports cantina near now-defunct Texas Stadium, sells made-from-scratch tacos al pastor and barbacoa from a catering truck they park in front of their restaurant, “but we plan to take it on the road this summer,” says Ojos Locos co-owner Jack Gibbons, who’s familiar with the food cart scene in other parts of the country. “Some restaurants in Austin make more money out of their truck than they do in their main restaurant,” says Gibbons. “It’s a low investment for a potentially high return.”