I was impressed with chef Sebastian Royo’s menu when I stopped by the newly opened downtown outpost of Agave Azul in early April. Royo plated playful dishes such as birria empanadas (lamb soup stuffed empanadas with crema and salsa verde), savory shrimp churritos with jalapeño tartar sauce, and my favorite dish of all, the Aga-burger: a succulent pile of beef, seared cheese, salsa, avocado, tomato, and lettuce. It’s one of the best burgers I’ve eaten all year (so good in fact that I returned the next night to eat another). I reached out to Royo this afternoon to ask him more about the Aga-burger, and he informed me that the dish, as well as others, are no longer on the menu, and that he is no longer employed at Agave Azul.

Restaurateur Zotico Reyes brought Royo on board as executive chef of the downtown location of the Mexican food restaurant early this year. “I guess people weren’t flocking to the restaurant as quickly as they expected. And it’s not always easy to deal with a chef. Bad combo,” Royo explained, “We ended on good terms, I like Zotico, I just don’t think I’m his best option at this moment.”

I reached out to Zotico Reyes, he too explained that the parting was a “mutual understanding.”

Royo moved to Dallas from New York for the job, but doesn’t plan on returning to the Big Apple anytime soon. He tells me that he’s enjoying Dallas and plans to roll out a food truck called El Rudo, and if things go well he’d like to eventually open a brick and mortar restaurant. And yes, he plans on serving the Aga-burger.

In the meantime, Agave Azul is gearing up for its official grand opening on May 28.

Update: Reyes sent me the dinner menu (which will be available starting May 18). He also explained that the restaurant is “still serving [Royo’s] tacos, tortas, the Aga-burger and the shrimp churros.” 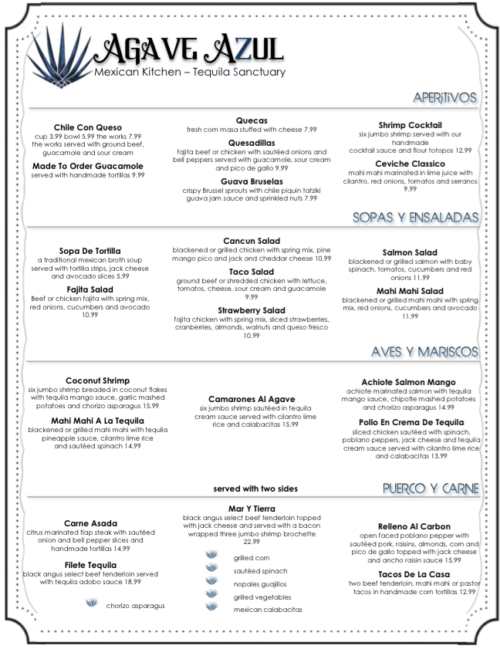