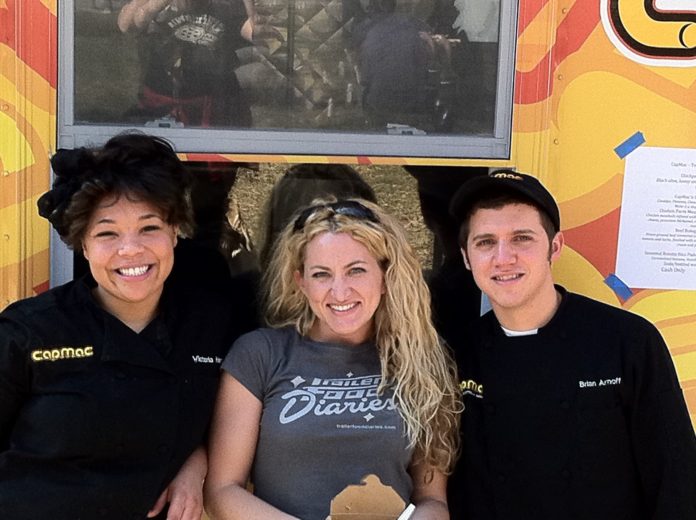 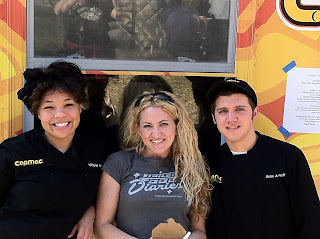 My first attempt to find a food trailer in DC was thwarted because of the timing.  It’s not like Austin where you have multiple culinary options at any given time of day.  The trucks in DC operate on an ‘ice cream license’, which I found out means they can only stop for business if there is a line.  Thus, several of them convene at parks during the day when people are on their lunch break.  My sources indicate there are only about 25 such food trucks in the DC area.  So after striking out on finding a ‘trailer’ for dinner I set out for lunch the following day in search of (drum roll): the CAP MAC FOOD TRUCK…..

After taking the metro (for my first metro experience), a cab, and then walking a few blocks to Farragut park (17th and K-ish) I was approached by the chef himself, Brian Arnoff, and was told our party would be the last of the day as he was almost out of cap mac.  This worked out nicely, as it gave me the opportunity to have a conversation with him after lunch to learn a little more about the mac daddy of the cap mac (sorry).

Chef Brian, originally from Poughkeepsie, NY graduated with a degree in hospitality management from Boston University and after several high end experiences in the dining world, he decided to try his hand in entrepreneurialism with the CapMac.  The food truck was open for business starting last November (2010) and serves an average 150 plates per lunch.  His menu is small and easily managed – both ideal qualities for success in the food truck industry.  Because he’s dealing with pasta, there isn’t a delay due to seasonal differences and with green in mind his cutlery is all biodegradable.

The ‘CapMac ‘n Cheese’ for $6 is their best-seller.  It involves Cheddar, Pimento, and Cheez-it crumbles on spirally macaroni noodles.  You can ‘make it sloppy’ (which you know I did) for an extra $2 to create the “sloppy joe meets mac and cheese,” in Chef Brian’s words.

Washington, DC: A Final Stop for CapMac, with A Pledge to Return