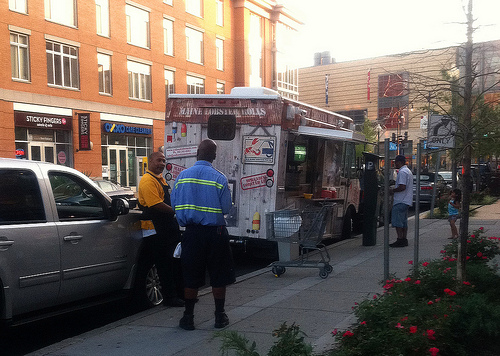 The Red Hook Lobster Pound food truck was scheduled to make a rare appearance in Columbia Heights this evening, so Mrs. T and I decided to see how the line was. The truck was legally parked in front of the Giant supermarket in the 1300 block of Park Road, NW. I saw the food truck employees pay at the meter, and they were not blocking anything or parked improperly in any fashion. We were first in line, but before we could order, a DC police officer walked up and started hassling the food truck employees about them setting up there. He stopped them from selling any food, and while he was blocking their operation, many of the people waiting in line in the blistering 98 degree heat gave up and left. He actually cost them business while he was telling them they had to move, they couldn’t sell food there, yadda yadda. Several of us on line started to get angry, and were yelling out things like “why don’t the police crack down on REAL crime”, and so on. I got annoyed and started loudly complaining to the MPD officer, and my wife was afraid I’d get arrested.

Meanwhile, there are a couple of unlicensed street vendors right up the block, just out of view in this photo, who blast loud music and sell goods of questionable provenance without interference from the police. Awhile back, there were those sketchy dudes selling baby turtles(!) in front of DCUSA with impunity. Also, meanwhile somewhere in the neighborhood, someone was probably getting mugged or shot. We have serious problems in this neighborhood that require urgent police attention: drug dealing, gang violence, graffiti, vandalism, theft, robberies, public drunkenness and urination, you name it.

Finally, the police officer stood aside and called his superiors on his radio for instructions (out of frame) while the parking control officer looked on (he may or may not have given the lobster truck a ticket). We got our lobster rolls – they were delicious. But much of the crowd had melted away, and the Red Hook folks didn’t stay too long apparently. I am so annoyed and angry at the police for driving away a food truck that we Columbia Heights residents view as an amenity, a little reward for a hard day of work and a commute home in the sweltering heat, but apparently MPD sees it as a threat to public order requiring more attention than all our other problems. I doubt the lobster truck will be back. 🙁