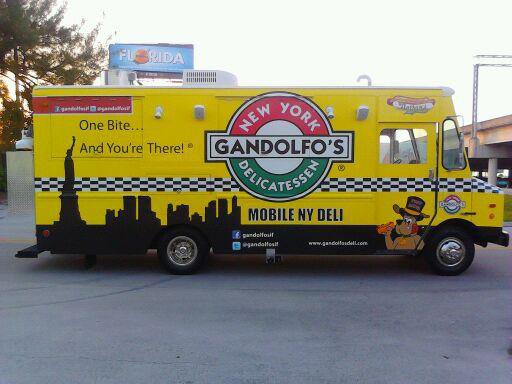 By CLARK CORBIN | The Post-Register

But for now, the Rigby resident said he is content being part of the street-meat revolution of eastern Idaho.

This year, Sathre and his business partners Bob Lasher and Jared Brown converted an old bread truck to launch the Gandolfo’s Delicatessen mobile deli, which supports their brick-and-mortar restaurant in Idaho Falls.

Sathre’s wheeled deli is one of 56 such mobile food vendors operating in eastern Idaho between Idaho Falls, Ammon, Rigby and Rexburg, according to city clerks contacted in each of those cities. Blackfoot also allows mobile vendors to operate once they receive a license, though the city employees who track the number of permits issued were not reachable late Monday, Planning and Zoning Director Rex Orgill said.

Gandolfo’s black and yellow truck adorned with a checkerboard pattern and New York City skyline offers a selection of more than a dozen hot sandwiches, ranging in price from $4.99 to $9.29.

Sathre has been parked along Main Street in Rexburg for the past four weeks. He said the venture opens up a new customer base for his business while he decides whether he’ll open a traditional Gandolfo’s in Rexburg.

“For the first two months, we couldn’t pay people to come here,” Sathre said. “But now that we’re here (in Rexburg), the people who have tried us say it’s so awesome and they’re surprised more people didn’t think of this.”

Sathre and his cohorts aren’t alone in the local mobile dining game.

In Idaho Falls, taco wagons have been part of the landscape for years, with cooks hawking burritos to an on-the-go lunch clientele.

In the past two years, the local industry has diversified, with trucks carrying a variety of chow branching out to new territory. Mobile vendors with such quirky names as Bikini Dogs and Tom’s Om Nom Nom Nom have intermittently staked out space on weekend evenings near the downtown intersection of Park Avenue and A Street.

Kay said Rexburg leaders restrict mobile vendors to operating in one permanent location on a seasonal basis for up to six months in an effort to protect established businesses. Once a permit expires, mobile business owners are allowed to reapply so long as they reach an agreement to park at a new location.

Gandolfo’s has valid licenses to operate in both Rexburg and Idaho Falls, the city clerks said.

Brigham Young University-Idaho student Kody Hansen became one of the Gandolfo’s mobile deli’s best customers after getting over his initial apprehension. Hansen has long been a fan of the restaurant’s pastrami and decided to try the truck to satisfy cravings left after a traditional Gandolfo’s went under in Rexburg.

“I was a little hesitant at first because sometimes mobile delis don’t have everything the same as in the restaurant,” Hansen said. “Out here, they serve everything I want, and I just love the food.”

Sathre and his partners actually got into the restaurant business by way of a mobile food truck. In 2007, they opened a Top Dawg mobile hot dog stand that they said did brisk business in Rigby. They still operate Top Dawg, which can be found parked outside the Idaho Falls Home Depot on Mondays through Saturdays.

Although mobile vending trucks appear somewhat en vogue, Sathre isn’t worried about competition. He envisions a day when several mobile food trucks will all park on the same lots or street corners. He said friendly competition will help spread awareness of the businesses and offer customers greater selection.