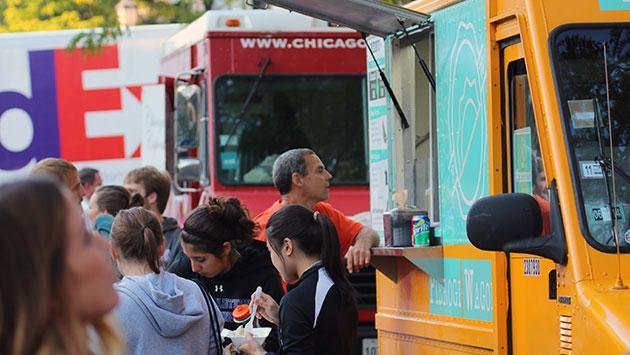 Evanston officials appear ready to give up on a regulation that limited food trucks in the city to ones operated by people who also own restaurants in town.

The Human Services Committee tonight will get a recommendation from city staff to scrap that rule — noting that it has led to there being no licensed food trucks based in the city.

Hummingbird Kitchen, which became the city’s first licensed food truck after a campaign in 2010 by the owners of Campagnola and Union Pizzeria to let them set it up, is now listed on a food truck directory as having closed.

The ordinance amendments drafted by Corporation Counsel Grant Farrar would also ease one restriction on where food trucks could park. The current ordinance restricts them from locating within 100 feet of any licensed food establishment.

The proposed rewrite would narrow that so the distance would only apply to restaurants — and not churches, hotels or big-box retailers that also happen to serve food.

And he’s recommending that city staff prepare a map showing where food trucks could legally be parked, rather than requiring operators to try to find legal locations on their own.

Not mentioned in Farrar’s memo is that the ownershp restriction led to a lawsuit against the city filed in 2012 by the owners of Beavers Coffee and Donuts, who sought to operate their Chicago-based food truck in Evanston.

The suit was backed by the Liberty Justice Center, which called the city’s restriction “arbitrary and anticompetitive.”