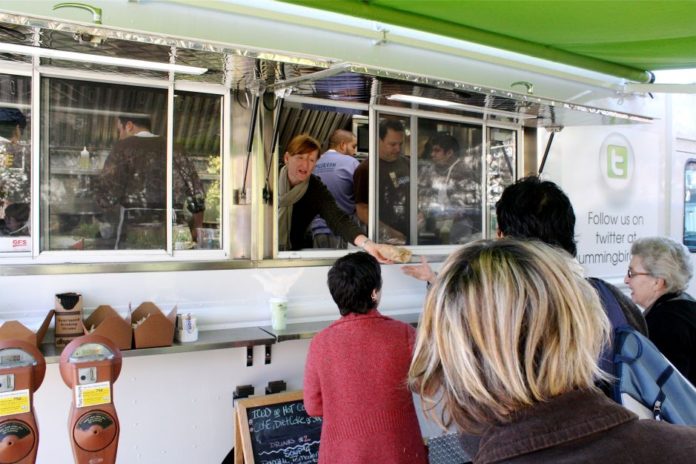 Pedestrians in downtown Evanston got their chance to sample the city’s newest dining option as the owners of the recently approved mobile food truck hit the streets for the first time. Steve Schwartz, Heather Behm and Vince DiBattista — co-owners of Campagnola Restaurant and Union Pizzeria — parked their 28-foot kitchen on wheels, dubbed Hummingbird Kitchen, at the corner of Chicago Avenue and Clark Street Tuesday afternoon after finally receiving the city’s first legal license to operate a mobile food vehicle in city limits. A steady stream of curious pedestrians flocked to the truck, choosing from four available dining options. “It’s amazing,” said Megan Davies of the crab cake sandwich with red cabbage slaw and Old Bay aioli on brioche bun. Davies, who came with her two young children, said she saw on Facebook that the truck would be open for business and was excited to give it a try.

“It totally matches the restaurant in terms of quality,” she said. “I equate food trucks with hot dogs, and this is definitely not that.” Evanstonian Gail Horvath also learned of the truck’s opening on Facebook and said the braised short rib tacos with zesty radish cilantro were “excellent.” “It’s better than I expected from a food truck,” she said. “I would definitely eat here again.” Back in September, Evanston’s City Council approved an ordinance allowing mobile food vendors to operate in the city. But Hummingbird Kitchen didn’t receive its license until early November. “It took longer than we thought to get our license approved,” Behm said. “Since we were the first, I think the city just wanted to make sure they did things right.”

In addition to the crab cake sandwich and braised short rib tacos (priced at $6), Hummingbird offered a chicken Caesar salad (also $6), an heirloom tomato soup ($4), coffee and soda ($2). “The soup went fast,” DiBattista said, adding that they sold the entire two-gallon batch made for the afternoon, and were quickly running out of everything else. Hummingbird’s next appearance could be this Saturday near Ryan Field for Northwestern’s football game versus Iowa. Behm said they were working on getting a location for game day parking.