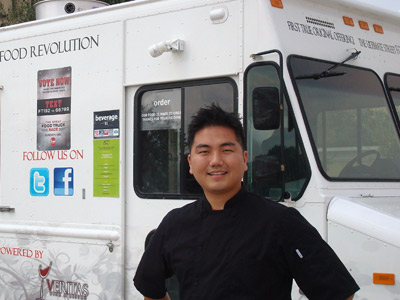 This season of The Great Food Truck Race has introduced America to eight delicious food trucks, including the two finalists, Hodge Podge and The Lime Truck. While the race on TV winds down, the race to vote for America’s Favorite Food Truck has ended and we have a winner: Chef Tai’s Mobile Gourmet Food Truck from College Station, Texas.

The contest to name America’s Favorite Food Truck started back in July with nearly 600 trucks and asked fans to nominate and vote for their favorite local truck. Over four million people voted and now, Chef Tai can claim the grand prize of $10,000 and the chance to appear on season three of The Great Food Truck Race.

We caught up with Chef Tai Lee to ask him about his passion on wheels, as well as what we can expect from him in the future. Not only is he a Texas A&M graduate, but he’s stuck to his roots and parks his truck around campus, serving the crowd he knows best.

FN Dish: You are a Texas A&M grad and you’ve opened up your truck in Aggieland — you didn’t go very far. Tell us your thinking behind opening up a food truck near campus.
Chef Tai: Well, I was originally going to open my business in Houston or several other cities, but as a new aspiring chef and restaurateur, I figured it would be safer to open in the city where I understood the market and where I had the strongest support from local friends and alumni at Texas A&M University.

FN Dish: Your menu is a “fun and inexpensive alternative to an upscale dining experience.” Talk to us about it.
Chef Tai: We serve gourmet food at Veritas Wine & Bistro, where I am the executive chef. I wanted to take those dishes and add a touch of quirkiness to them, without charging more than I needed to. For example, instead of popular chili cheese fries, I serve Sweet Potato Poutine With Shiitake Cream Sauce and Melted Cheddar Cheese to offer a twist. Instead of an everyday hamburger, I created a gourmet burger using American Wagyu beef and spicy mayonnaise made with Sriracha chili paste. These entrees cost less than $10, including tax on the truck, but many of these same menu items are found at Veritas for a minimum of $15.

FN Dish: If you had to choose: pulled pork or short ribs?
Chef Tai: This is a mean question, since I could eat short ribs every day. But then again, I am a huge fan of pork. Pork is versatile and inexpensive, so we can offer more bang for the buck to our customers. But if I had to choose, I would have to go with short ribs for their flavor and texture. Get my recipe for Pulled Pork BBQ.

FN Dish: You have a dedicated fan base that helped you reach #1. What would you like to say to them?
Chef Tai: Local residents, Aggie alumni and their friends and family have helped me get to this point. I am nothing without them and I am truly grateful for what they have done for me personally and professionally. I love everyone who has supported me for the past 10 years of my cooking career and who will continue to support me for many more.

FN Dish: If you make it to season three, what’s the one lesson you’ve learned from this season that you’ll take with you?
Chef Tai: Many lessons from both seasons one and two have been already been applied to our daily operation. With that being said, being flexible with menu planning will play a pivotal role.

FN Dish: I’m sure you’ve been watching The Great Food Truck Race closely. Who have you been rooting for?
Chef Tai: I must say Hodge Podge — the team is very passionate about what they do. They’ve been through some tough challenges, but they always seem to pull it together last minute.