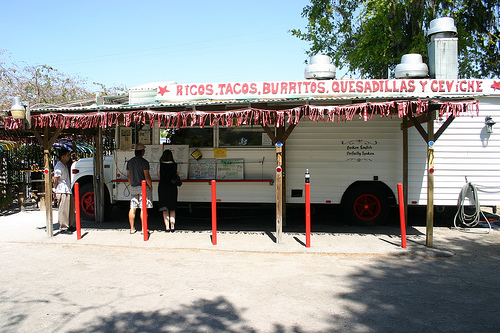 The Food Networks’s Guy Fieri has visited some of America’s best out-of-the-way-places for the channel’s popular Diners, Drive-ins and Dives. Add Tampa’s Taco Bus to the list.

If you were wondering why the popular Mexican street food was closed to the public Tuesday afternoon, it was because owner Rene Valenzuela was inside with Fieri and a film crew for an episode of the road food show.

“He said he’s been in many, many Mexican restaurants and ‘This is the best torta I’ve ever had,’ ” Valenzuela said, his excitement impossible to mask. “It was just awesome coming from him and he wasn’t just saying it. It was off stage, him and me. That was a great feeling.”

The producers haven’t given him a broadcast date yet, but he was told it would be anywhere from three months to a year.

He said he got the call about six months ago that Fieri, who also hosts the NBC game show Minute to Win It, was interested in featuring his popular place at 913 E Hillsborough Ave.

He recently expanded to St. Petersburg and has a hard time keeping up with the crowds. Already his customers are telling him Tampa’s going to get worse. “Now you are going to get crazy busy” he said they told him.

Valenzuela was thrilled by the call, “because that is my favorite show. I love how instead of some (celebrity chef) they have these great foods from some Morroccan restaurant or barbecue from North Carolina. You can’t make that stuff up. It’s got character and tradition.”

Square 1 Burgers in Tampa also got a phone call from the network but was disappointed to find out that their two Sarasota locations disqualified them from the show, the manager said.