Food Truck Eats’ second installment in the Distillery District was a bona fide blowout success. Outshining their first food truck gathering in June, a fierce hunger for street food kept #foodtruckeats trending well past the event’s end time. The first Food Truck Eat’s gathering left Toronto foodies with their chopsticks in a tangle of excitement over the thrill of gourmet street grub. Food and wine writer Suresh Doss spearheaded the render-vous of street connoisseurs after being inspired by the food truck moment sweeping the US of A. Though the legality of street food vendors has been a contentious issue around Toronto, the movement in favour is clearly strong. 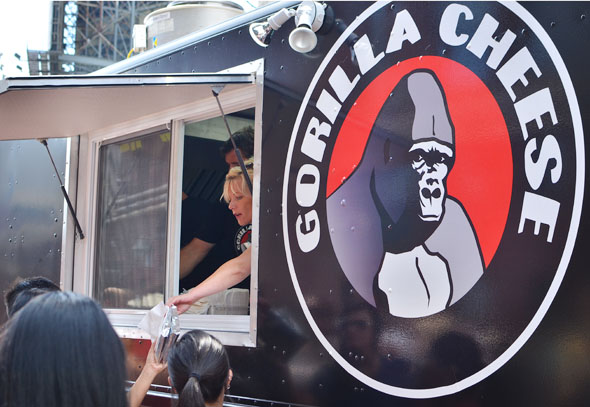 The ominous black Gorilla Cheese truck was a serious lure for many to the beautiful Distillery locale. Unlike some of the other trucks, like Caplansky’s and Smoke’s Poutinerie, Gorilla Cheese is exclusively a resto on the the go. The queue stretching nearly the length of the site was a true testament to their diehard dedicated following, but I wasn’t quite diehard enough yet to wait 30 minutes in noon time August sun. It was hard to see what was coming out of the big black truck as customers scooted away anxiously with their foil sealed bags, but clearly their “massive grilled cheese half sandwiches” are something serious. 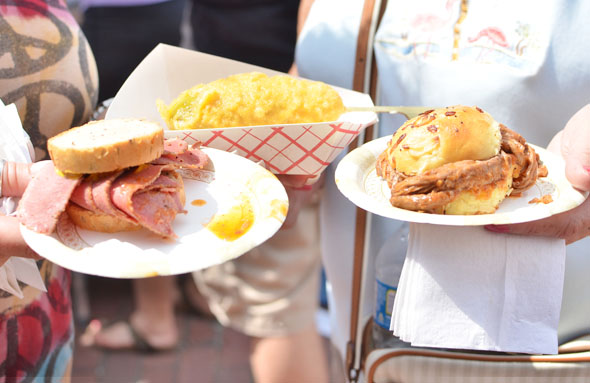 When I first came by the already famous Caplansky’s truck there was a thin crowd hovering around, but on my way back their line was running parallel to Gorilla Cheese’s in an all out war of the food trucks. $4 sliders were the item of choice, but a pricey $11 combo was also on offer. 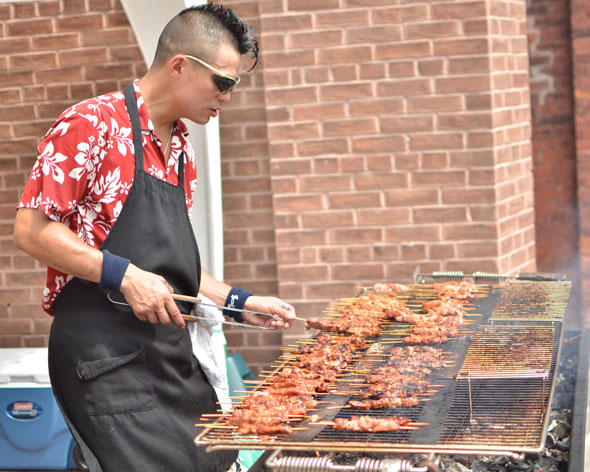 Gastronomo Wagabundo served up its own hefty crowd wings a la Kim Jon-illin’ style that had me wishing I had time to go back for more. 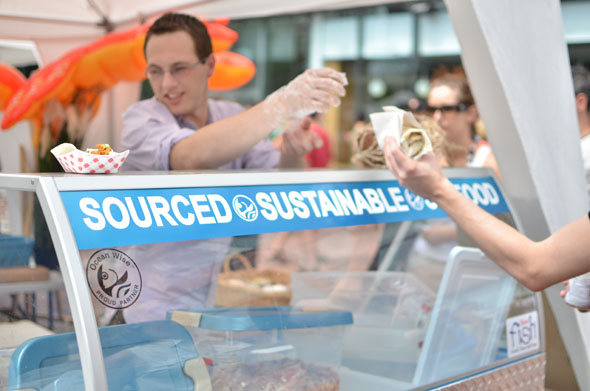 Across from the mega-liners, The Olliffe Grill Vespa-Truck served crafty sausages and curry wurst. The Piri-Piri chicken sausage I ordered for $3 packed a serious hit of heat and a heap of iceberg lettuce to ensure I made a mess. 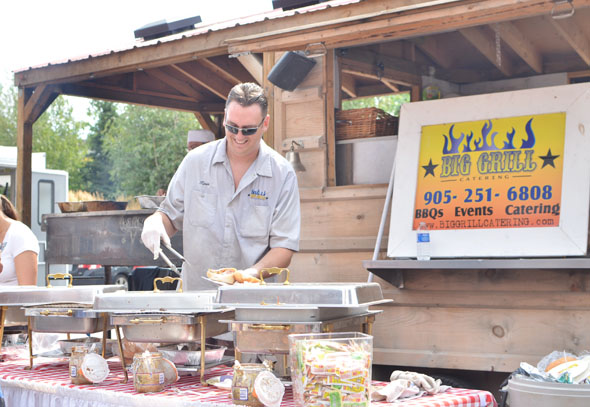 Big Grill had a steady and speedy queue for their $5 smoked peameal bacon sandwich with caramelized onions. Their pot roast sold out after 400 servings in 2 hours. The ‘truck’ was completely transformed into a southern style wooden shack complete with ‘pa out on the deck grillin’ up the meat. The set up was as charming as the hearty comfort food. 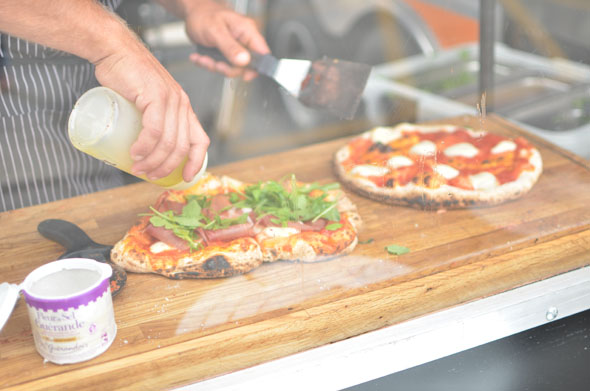 An entire traditional wood oven kitchen was recreated for the open face style Wood Fired Pizza. Its road worthiness seems dubious, but the gourmet pizzas pulled out on a long wooden stick were indeed a delicious. 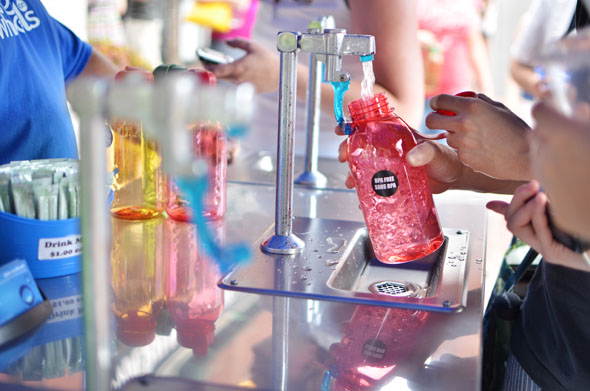 Free water refills for reusable bottles were offered up by Water Wheels. They estimate up to 20,000 plastic bottles would be saved by providing free water to guests. There were no bins full of plastic drink containers at this mini-festival unlike at many others. 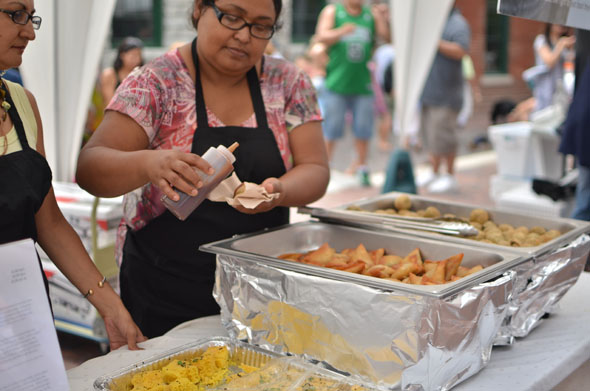 The ladies at Tiffinday were spreading the word about the sustainable benefits of choosing a few or even just one vegan meal a week. They were out run by their sustainable seafood neighbour next door, but their vegan samosas were top notch. 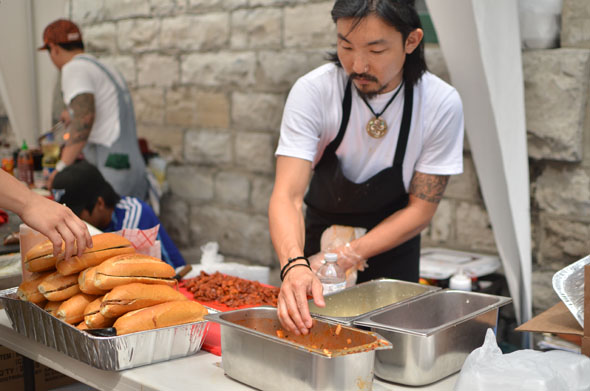 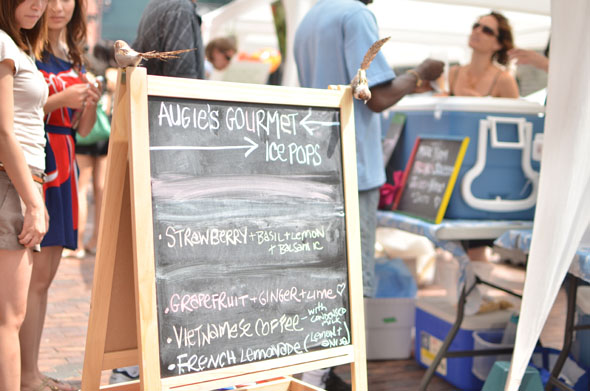 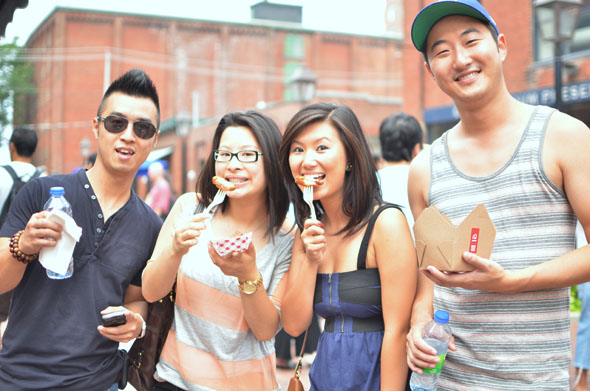 The entire event was packed with Saturday lunchers on a mission for the oddly limited street food scene in Toronto. It seemed quite a distinguished palate has already developed amongst the street goers with some trucks commanding lines beyond what might be deemed sane.