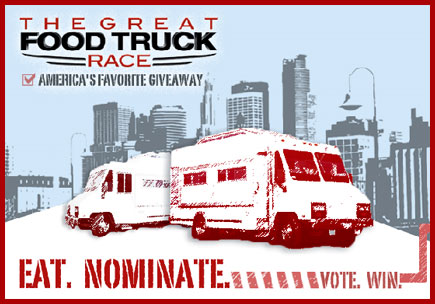 NEW YORK — Food Network’s The Great Food Truck Race returns for a third season this summer, with host Tyler Florence presiding over the cross-country culinary road trip with a brand-new twist: no longer a competition between current food truck operators as in prior seasons, this high-stakes battle is between eight teams who desperately want to be in the food truck business – they have a dream, a concept and insane culinary skills. Each three-person team is provided a vehicle for the race, but only the grand prize winner gets to keep their food truck and a $50,000 cash prize to start their dream business. From mobile mini-pies and authentic Aussie grub to specialty waffles, each team’s inspired cuisine and road strategy is put to the test in city-specific challenges that begin at a Long Beach, Calif. lighthouse and continue through the finale at the West Quoddy Lighthouse in Maine, the easternmost point of the United States. The seven-episode series premieres on Sunday, August 19th at 10pm ET/PT, after the finale of Chopped: Grill Masters, and beginning the next week will air in its regular timeslot Sundays at 9pm ET/PT.

“We love food trucks because they offer a relatively low cost, infinitely creative route to entering the food world. Casting aspiring food truck owners this season really amps up the competition – these teams are literally fighting for their dream,” said Bob Tuschman, General Manager and Senior Vice President, Food Network. “Their culinary skills, business savvy and entrepreneurial spirit will be road-tested, and viewers will love seeing if the aspiring chefs’ dreams hold up when the rubber meets the road.”

In the season premiere, the eight teams of aspiring food truck owners arrive in Long Beach and are welcomed by host Tyler Florence, and he presents them with the food trucks of their dreams and matching cars. The teams are then sent directly to the toughest, most cutthroat place in the food truck universe, the place where it all started: Los Angeles. These rookies learn quickly that running a food truck is much harder than it looks, and the seven surviving teams realize that they are in for the ride of their lives. From the west coast starting point, the route then takes the teams to Flagstaff, Ariz.; Amarillo, Texas; Fayetteville, Ark.; Nashville and Cleveland – leading up to a final tri-city New England battle from Boston to Portland and Lubec, Maine.

For even more Food Trucks, viewers can visit www.foodnetwork.com/foodtrucks all season long for exclusive behind-the-scenes photos, video recaps and weekly blog posts. Fans of The Great Food Truck Race will also soon be able to check out their favorite food trucks from previous seasons with the upcoming launch of Food Network On the Road app for iPhone® and iPad® available for free download on iTunes in August. Food Network’s On the Road will provide fans with a curated selection from Food Network chefs, and from hot spots seen on hit shows like Diners Drive-Ins and Dives and Best Thing I Ever Ate. For more information about Food Network On the Road, visit http://www.foodnetwork.com/ontheroad .

“Food Network fans have long been asking for on-the-go access to the food and places they’ve seen on television and want to discover for themselves,” said Bob Madden, General Manager and Senior Vice President, Digital, Scripps Networks Food Category. “We’re excited to answer that call with the upcoming launch of Food Network On the Road App.”

The Great Food Truck Race is produced by RelativityREAL, LLC.