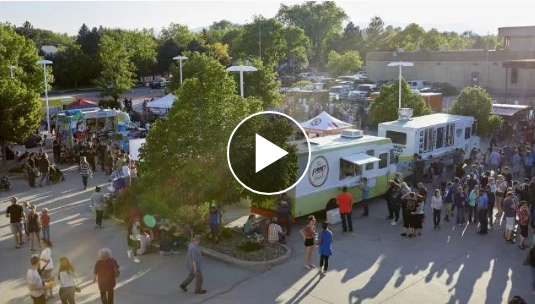 By Erin Udell  |  The Coloradoan

“I’ve been joking that we’re moving from a metal truck to a metal container,” Borocz said, standing in the bare-bones, 220-square-foot unit Friday afternoon

Walking around the plywood-lined, T-shaped space, Borocz explained where he plans to put the kitchen and bar-top seating, which should fit roughly eight indoor diners, he said. A small patio with tables and chairs will fit more during warm weather.

The new location at The Exchange will be La Piadina’s first brick-and-mortar shop. The popular food truck — which serves freshly-made flatbread sandwiches traditional to Borocz’s home country of Italy — has been a mainstay at local breweries like Odell Brewing Co. and New Belgium, where Borocz sets up shop weekly.

Two years ago, Borocz announced plans to open a La Piadina location in Foothills Mall. Those plans fell through and, after encouragement from a friend, he started considering joining The Exchange instead. Borocz said it feels like it’s a good place to grow the business while still honoring its street food roots.

“It has this European feel,” Borocz said of The Exchange, pointing to the tables sprinkling its bustling outdoor courtyard.

“And the fact that you can drink outside is also — it makes me feel like I’m back in Italy,” Borocz added, referring to The Exchange’s recently acquired common consumption liquor license, which allows visitors to mill around the courtyard with beer, wine and cocktails purchased at its businesses. “It doesn’t really feel like Fort Collins, you know?”

Borocz secured a lease for the shipping container space one month ago. Since then, he’s installed a La Piadina banner outside and commissioned a locally-produced video to announce the news.

He and his team will still run the La Piadina food truck once a week at both Odell and New Belgium as well as participate in Tuesday night food truck rallies in City Park, Borocz added.

La Piadina specializes in Italian flatbread sandwiches, making them from scratch with organic flour and fresh ingredients, Borocz said. The new menu at The Exchange location will be similar to that of the food truck but will include expanded offerings like more salads and flatbread options.

Borocz also plans to offer a small selection of beer and wine, including a tap of Odell beer and one of New Belgium beer — a nod to the food truck’s most common locations.

After all, it’s only right to honor your roots while finally putting some down.