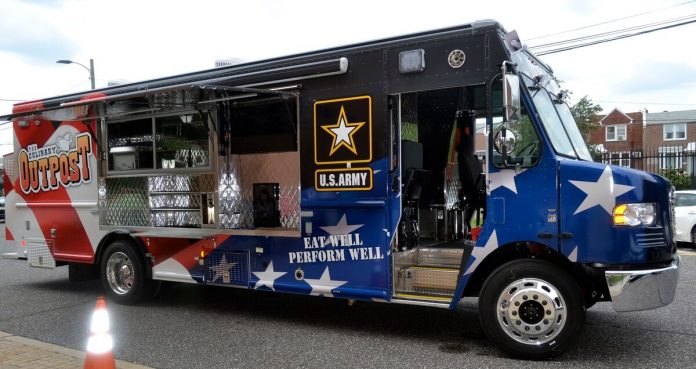 The Army is bringing food trucks to soldiers at six bases.

The initiative is intended to help soldiers training on ranges and other remote locations get meals without “leaving the base for fast food or making a long trip back to a dining facility while training,” a Defense Logistics Agency release reads.

All six trucks are expected to be delivered by the end of the year.

A pilot program already fielded the trucks to Fort Stewart, Georgia, and Fort Carson, Colorado, in 2017.

“The feedback we are receiving is extremely favorable,” Lt. Col. Byron Coleman, director of the Joint Culinary Center of Excellence, said last year regarding the pilot program. “We have discovered the need for some minor equipment modifications to the trucks for efficiency and are making these changes as they are identified.”

The equipment modifications on the new trucks included closing the gaps between the stainless steel appliances and counters so food and debris wouldn’t fall in between, as well as upgrading the ventilation, air conditioning and heating systems, according to the release.

During the pilot program, the food trucks offered burgers, tacos, salads and rice bowls made to order, along with sides and drinks.

The contract for the six trucks totaled $1.35 million and was awarded in April 2019.

The first truck was sent to Fort Drum on July 9 to provide a training platform for the Army’s Joint Culinary Center of Excellence staff, who will then train other cooks at the six bases, according to the release.

The bases receiving the new food trucks were chosen because they are considered “food deserts,” Jose Millan, a senior food systems analyst with the Joint Culinary Center of Excellence, said in the release.

All the food trucks will be named “The Culinary Outpost,” and are planned to serve between 200 and 300 troops per meal, three times a day, the release said.

Soldiers can purchase three to five meal options by swiping their common access card at the trucks or by paying in cash. The meal prices will be comparable to the rates at regular dining facilities.

Each truck will come with various appliances, such as panini presses, air fryers and digital menus with touch screens for soldiers to make custom changes to orders.