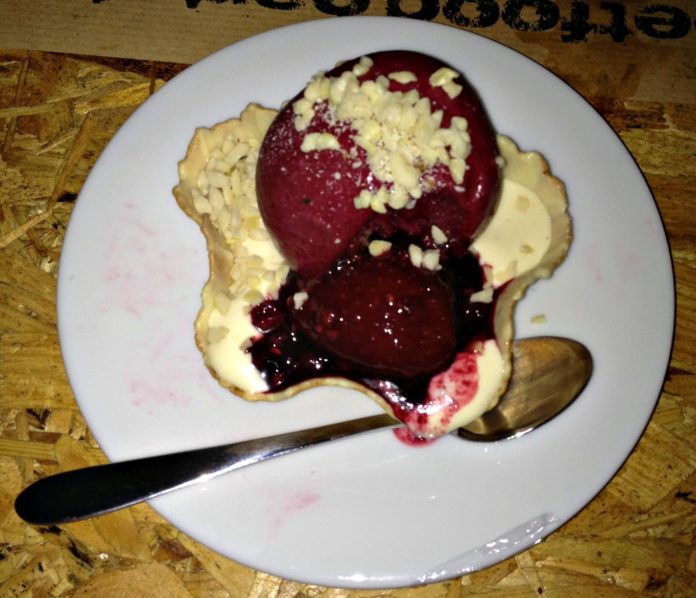 By Blondie and NotBlondieHusband | TransAtlantic Blonde

When I left the US for Glasgow my experience of food trucks was limited to Manoosh, a guy who had a hot dog and pretzel cart late at night on GWU’s campus.  Of course then a few years later I was introduced to the infamous “burger van” when my office was on an industrial estate and that was the only dining (I use that term loosely) option within walking distance. Neither is a fair representative of the now booming food truck trend.

Food trucks have become a phenomenon in the USA over the past few years and like most booming food trends they are slowly making their way to the UK. If you love the Food Network like I do you may have seen them featured on shows like “ Adam Richman’s Best Sandwich in America,” “Andy Bates’ Street Feasts” and my personal favourite, due to the dreamy Tyler Florence mostly, “The Great Food Truck Race.”  Basically think of your favourite cuisine in a mobile kitchen giving you your favourite eats to go.  Trucks in the USA have massive followings and they only need to tweet their location for the day to have a queue down the block.
So when I heard that Scoop Events and Smoak were coming together for the first ever Street Food Cartel, a pop up food truck restaurant in Glasgow I was mega excited—then I heard it had sold out almost immediately. Bummer. Luckily for me they added a second night and we were able to get tickets. Tickets cost £5 each and gave you entry and a free drink.
We went for the 6:30 setting but I’ll be honest and say we arrived about 15 minutes late to SW3 but that wasn’t a problem. It was a bit sketchy walking in since it is literally a big warehouse, but once inside it wasn’t so scary.
The venue was a warehouse so it was pretty cold but my main complaint venue wise was that it was really hard to hear. The plywood tables were quite large so NotBlondeHusband was pretty far away from me and since the music echoed in the empty warehouse it made it quite hard to hear. I was looking forward to going out with my husband and while I don’t mind sharing a table with other people I spent most of the night invisibly rolling my eyes at the utter shite the person next to me was shouting at their friends.

However, you don’t really go to a pop-up restaurant for the ambiance so let’s talk about the food. We were offered an elderflower cocktail or beer for our free drinks and since I don’t like elderflower I became the designated driver and NBH got two beers. He went for the Harveston Schiehallion and really enjoyed it: it had a lot of flavour. The menu was split into two—one half for Scoop and the other for Smoak.

They suggested dishes were to share but 3 dishes per person, which to be honest I found a bit confusing but we went for five between the two of us. Our Smoak dishes came out first:

This picture does not do it justice—the mac and cheese was amazing. I may or may have not stuck my fingers in the sauce after all the pasta was done. Seriously delicious.

This was good but when a dish is described as being “to share” I tend to expect more than one slider. Also it was impossible to dip into the dipping sauce because it was in such a wee cup. We ended up pouring on the sauce rather than dipping. The chicken itself was really nice I just wish there had been two or three sliders in our tray.
Next up was the dishes from Scoop:
Confit Pork Belly, Viet Slaw, Scratchings Lettuce Wraps & Nouc Cham

This was NotBlondeHusband’s choice. He’s a big fan of pork belly but for him the winner of this dish was the Viet Slaw. It wasn’t that the pork belly was bad but it was quite fatty and didn’t really stand out on its own. If you took away all the other components of the dish it wasn’t palatable.
Ox Cheek Taco, Guacamole & Sweet Pickled Onion

We both love tacos but the ox cheek was far too rich. The guacamole and onions were both nice but for me taco fillings should be lighter and less heavy. It didn’t taste bad it just was too rich for my taste.
Butternut Spring Roll, Beetroot Pesto, Feta & Toasted Hazelnut Dukkah

This was hands down my favourite. I love beetroot and the pesto was so fresh and the perfect pairing with the sweet butternut squash. It was so good I tweeted Scoop to ask how they made it. Also hands down the best feta I’ve ever had. I might have to tweet them again to find out where they source it from as it was light and fluffy rather than dry and salty like some feta.

We went for both desserts on offer because well that’s how we roll and oh wow I’m so glad we did.
Smoak: White Chocolate Cheesecake, Raspberry & Bourbon Cranachan

Normally I’m not a huge fan of Cranachan because it can be a bit too boozy for me but this was perfectly balanced. To be honest I don’t really like cheesecake that much but it was creamy without being sickly and smooth without being overly rich.
Peanut Butter Parfait & Jam Sorbet

Being American I’m a huge fan of the peanut butter and jam combination and this did not disappoint. We expected it to actually just be strawberry sorbet but the sorbet was actually made of strawberry jam and was tart enough to counter balance the peanut butter parfait. Again I may or may have not stuck my fingers in the leftover melty bits on the plate.
With £10 entry, £38.50 for our food (plus one more beer) + tip it certainly wasn’t cheap but the quality of food was high. Yes everything was served in paper baskets but you had proper china and silverware to eat out of—it’s street food that doesn’t bother me. I’d hope if these trucks go out and about (and have no warehouse overhead) that item costs would be slightly lower. On the whole we had a great evening but that’s not the kind of money we could spend on a regular basis.
I hope this was just a taste of what’s to come for Glasgow and we’ll soon have food trucks all over our dear green place with amazing and interesting alternative dining options for us all.