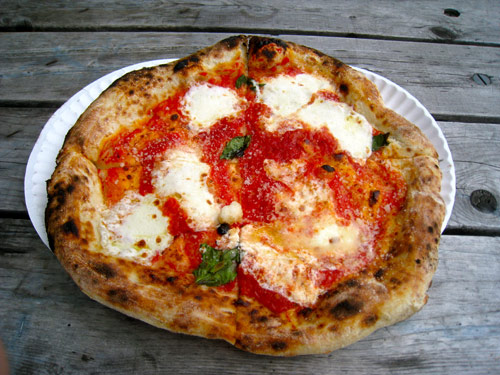 Clockwise from top left: Dave Sclarow builds the pies at a hectic pace before passing them to Pizza Moto’s stickwoman. The menu lists Margherita and white pies, with the option to top either with pepperoni. My Margherita pie, fresh from the oven; I brought it into nearby Empire–Fulton Ferry Park to wolf it down at the tree-shaded picnic tables there. [Photographs: Adam Kuban]

Pizza Style: Neapolitan
Oven Type: Mobile wood-fired oven
The Skinny: A good Neapolitan-style pizza becomes great when you consider the fact that it’s made outdoors in a mobile trailer-based oven. Visit when Moto is at the Brooklyn Bridge Flea (Sundays); you can’t beat the view from the park
Price: Margherita, $9; white pie, $10; add pepperoni to either for $2 more

I’d been avoiding the Brooklyn Flea since its inception in April 2008. With hipsters hawking items of questionable provenance, I figured fleas were the least innocuous bug I might carry home with me. But a nice summer day coupled with time to kill and the urge to try some new (to me) pizza roused me from my air-conditioned cave.

As you well know by now, Pizza Moto debuted at the Fort Greene Brooklyn Flea Sept. ’08. Based around a mobile trailer-mounted pizza oven, Pizza Moto cranks out Neapolitan-style, wood-fired pies on Saturdays (at the Fort Greene Flea) and Sundays (at the Brooklyn Bridge Flea). It’s staffed by Dave Sclarow, chef de cuisine at Lunetta in Cobble Hill, and two assistants—one to take orders and another to bake the pies that Sclarow builds almost nonstop at a folding prep table topped with a blue-checked tablecloth.

Even though I arrived at the tail end of the lunch rush, the efficient crew handled the line with ease. It took 18 minutes from the time I joined the line (about 12 deep) to the time I had a hot pizza in my greasy little hands.

Straight out of the oven, the pies get a liberal dusting of grated grana padano cheese and a judicious pour of some very fragrant extra-virgin olive oil before the cashier slices them into quarters.

I watched the crew crank out pie after pie while I waited, most with remarkable consistency (at least visually), with only a couple that looked a little too charred in spots. My own pizza had a light char and could have probably stood a little more time in the oven.

Still, it was cooked through and adequately crisp-chewy with a fairly airy hole structure. If you click the photo above, you can see that the dough at the pizza edge is just north of the border between cooked and raw. As in all things pizza, your mileage may vary, but I was happy with what I got.

The dough is tangy enough, no doubt thanks to the sourdough starter, but most of the pie’s flavor seemed to come from the salty sauce and the fragrant olive oil that’s squirted over the pie from a plastic squeeze bottle (a wholly appropriate dispenser, given the picniclike atmosphere of the scene). The fresh mozzarella, from Aiello’s on Court Street, is excellent—its creamy richness helps balance the saltiness of the bite, though there are plenty of bites where you’ll get nothing but sauce (made from San Marzano tomatoes, naturally).

It’s a good pie and is indeed the best pizza I’ve had from a mobile oven to date. If you’re down near Fulton Ferry Landing on a Sunday, it should be your go-to spot for pizza, handily besting nearby Ignazio’s and maybe even Grimaldi’s—particularly if you compare it to an “off” pie from the latter. Plus, you can’t beat the view of the city skyline from the park between the Brooklyn and Manhattan bridges.

It should be noted that this is Sclarow’s third oven. As he says on the Pizza Moto website, “the previous two were crude brick-and-mortar structures that lasted only a few weeks aboard the trailer. The punishment from NYC’s streets quickly reduced them to shattered piles of rubble.” The new one retains a masonry hearth but has a double-hulled shell of 12-gauge insulated steel.

Scottsdale, AZ: 2018 Street Eats Food Festival – A look at which food trucks will be there