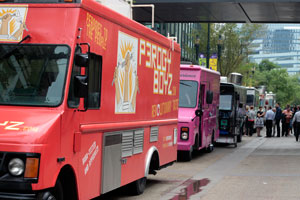 Halfway through the great downtown food truck trial, the conclusion is … the City Council should get out of their way.

The same conclusion should have been drawn before the trial began a month ago.

Under public pressure, the council approved a two-month test period on Commerce Place downtown. It’s gone well, and the city staff recommends changing the ordinance that bans “motorized mobile food vendors” from setting up shop in the central business district.

That’s promising. It was obviously a mistake for the council to close downtown’s central business district to food trucks, which are increasingly seen in other cities as a viable dining choice. It’s only old-fashioned, protectionist thinking that says government should shield existing restaurants from additional competition.

In Greensboro, the month of October saw people lining up at the few food trucks allowed to set up during fixed hours on a single block downtown — or at least lining up when the weather was pleasant and where the food was good.

But that’s not the point. Like restaurants or any business, some food trucks may do well while others fail. Consumers make that determination. The City Council’s job is to set reasonable and necessary regulations that apply fairly to all, and then back off.

Sure, there are complaints that food trucks enjoy advantages over fixed restaurants and contribute less to the economy. Councilwoman Trudy Wade made that point at a council work session Tuesday, suggesting the city take steps to put them on a more “equitable” basis through higher fees or more regulations.

It’s true that mobile vendors have lower overhead costs. They don’t employ as many workers, and they pay less in taxes. So what? Fixed restaurants aren’t all the same, either. Some set lower prices than others. Some have more expensively decorated dining rooms. Some do most of their businesses through take-out orders. Some deliver. Do the differences give some an unfair edge against others? Should the city try to smooth out those differences through regulations and fees?

Otherwise, there should be minimal restrictions. Even a proposal staff presented to the council Tuesday goes too far: allowing only one truck per private lot. Councilwoman Nancy Hoffmann wisely questioned why, when some lots have plenty of room for more.

The City Council’s job is to set reasonable rules and then stand back. So, at its next meeting Nov. 7, it should reverse its ban on food trucks in the central business district and let the public decide with its dollars whether this is an appetizing option for downtown.