By Remo Zaccagna  |  The Chronicle Herald 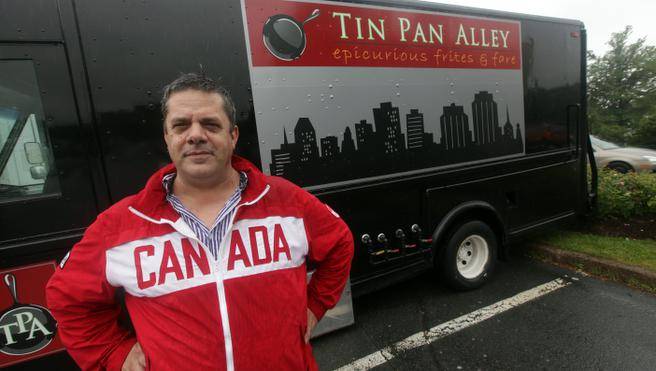 And Halifax is hardly alone.

The popularity of gourmet food trucks, which serve culinary creations different from the standard street fare of hotdogs and fish and chips, has exploded across the continent, led by food truck meccas like Portland, Ore., and Los Angeles.

“The reason why I started Nomad and what pushed me toward it was the fact that there’s this huge trend and (it’s) coming north, and I saw that and said, ‘It’s going to be here eventually, let’s get it started,’” said Nick Horne, founder of Halifax’s first gourmet truck.

Nomad Gourmet operates on Argyle Street and Joseph Howe Drive during the week and at the Halifax Seaport Farmers’ Market on weekends.

Horne served his first official customer last Aug. 18, and in the year since then he’s been joined by at least four other food trucks spread out across the Halifax region.

And he thinks that’s a good thing.

“At this early point in the culture, more is better for food trucks,” Horne said. “The more that we have, the more the culture grows and the more people realize that you can get really awesome food out of a food truck that’s not just fish and chips or fries.”

Nomad was soon joined on the scene by the Food Wolf, co-owned by Natalie Chavarie, which specializes in what she calls “comfort food with Asian flair.”

Operating largely out of private commercial lots in the north end, Chavarie has been at the forefront of the burgeoning mobile food scene. She credits the popularity of Food Network shows like Eat St. and consumers’ growing desire to eat healthier, locally sourced food.

“We have also witnessed in the last three years in Halifax and in Nova Scotia an incredible swell of the local food movement,” she said. “I think that has a lot to do with it.”

Karl Warme got his first taste of food truck culture while living in Los Angeles for several years.

“It was just a way of life, it was one of the meals you had during the week, stopping by the burrito truck for your favourite burrito,” he said. “It was just an option that was available.”

Along with chef Brendan Sullivan, who also owns Presto PastaWorks and On the Wedge in the Sunnyside Mall in Bedford, the three have been serving hungry customers for several weeks, mostly on a lot at 1225 Bedford Hwy. across from Sullivans Hill.

Warme has been taken aback by how Haligonians have embraced the new arrivals.

“It’s what people want,” he said. “I’ve been amazed at the looks on their faces as they walk up to the window, as they look at our menu, and then as we hand the food to them and then they walk off — they’re thrilled.”

The newest kid on the food truck block is Bite Me Urban Diner, a partnership between Paul Matchett and former Atlantica chef Matt Brewer.

“What we wanted to do was kind of take diner-esque foods and take and put modern twists and spins on them that are a little unheard of and you wouldn’t usually think are pairings that go together,” Brewer said from their customary location at the corner of Windsor and Young streets near the Halifax Forum.

Brewer said the popularity of food trucks in Halifax correlates with a “dying trend in today’s society,” which is the fast-food joint as the go-to destination for a hungry populace.

“A food truck I think starts to fit that role perfectly where you can come to the window, you wait five minutes, but the food that you get is healthy, made from scratch, it feels like you went home to mom for lunch and got your meal, and then you go on with your day,” he said.

As a way of promoting food truck culture in the city, the mobile vendors have formed the Food Truck Association of Nova Scotia, co-chaired by Chavarie and Horne.

Along with Argyle Street’s UnderPressers, the five members plan to hold a food truck rally in the city sometime this fall.

“We’re co-operating with each other and we’re collaborating to develop a culture and to get along in the first while, at the very least, so that people are educated about the products and about the fact that if you don’t necessarily want chicken and waffles from Nomad, you can go get some really great Korean fusion from Food Wolf, and it’s not fries,” he said.

But the group fears its efforts to grow the culture could stall if a city mobile food vending bylaw is not amended.

The bylaw, C-500, allows street food to be sold in seven locations around the municipality, forcing many to seek private lots to do business in. The bylaw also restricts the number of hours and prohibits the trucks from rotating from the municipal sites.

“In a lot of American and Canadian cities, we’re seeing a lot more shared sites and mobile food vending sites where multiple food trucks are able to work in a more intimate manner,” Chavarie said.

Horne noted with frustration that he applied in June of last year for a spot on Purdys Lane and has yet to hear back from the city.

“I think if the city starts to work better at its mandate to bring new spots out and take those requests and actually look at them and not just push them to the side, then yes, the culture can grow just fine,” he said.

A city staff working group is studying the issue and is expected to report back to council in the next few weeks on recommendations to amend the bylaw.

Coun. Jennifer Watts (Peninsula North) said she is in favour of greater mobility for food trucks but she wants input from various business improvement districts.

“I do know that there has been controversy and difficulty in other cities as well, and sometimes there have been real concerns on the part of existing businesses about the implications of having food trucks,” she said.

“I think we need to be sensitive to that, and I think by consulting with the BIDs, I think it’s an appropriate thing.”

Coun. Waye Mason (Peninsula South-Downtown) noted that the bylaw was enacted years ago for ice cream, hotdog and fish and chips vendors.

“It’s mind-numbing that these are even issues, but the law is the law, and even two years ago, there was no demand for this law to be changed and now there is, and that is underway.”

While the scene has grown exponentially over the last year, Brewer thinks the city has reached a temporary saturation point, at least until the bylaw is changed.

“I don’t think you’re going to see too many more trucks popping up within the immediate future,” he said.

“I think it was probably a bit of a coincidence that this summer alone there were so many new trucks that have popped up.”

But there will undoubtedly be more, and the operators caution that running a food truck isn’t easy.

“The fact that we’re mobile is not necessarily an advantage,” Chavarie said. “It means that you have to work harder at finding your market because your market might not always be where you are.

“It’s one of the most rigorous and demanding businesses that I’ve ever worked in because of the logistics required to run a truck.”

Added Horne: “Anybody out there starting a food truck, come buy me a beer and I’ll definitely set you straight. It’s not an easy industry.”