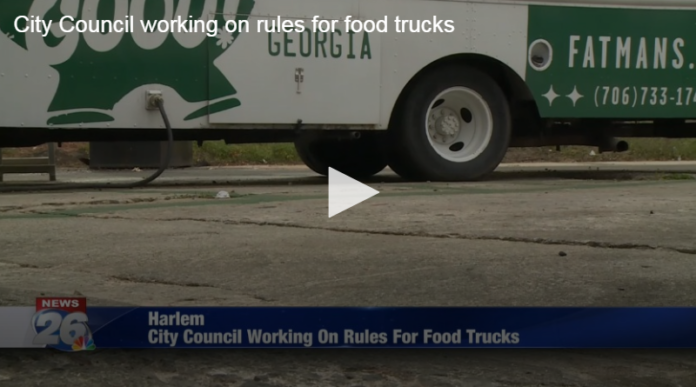 The mayor says they want to make sure food trucks don’t interfere with other businesses in the area.

Fat Man’s Owner Brad Usry said, “We use our food truck whenever we have an opportunity, typically people will hire us for a rehearsal dinner or a wedding reception, but if there’s an opportunity where there’s a number of people, a critical mass of folks we love the opportunity and people invite us.”

Now Harlem could be adding food trucks to the local menu, not just for festivals but weekdays too.

Fat Man’s owner Brad Usry has his own food truck.

Usry says they take it all over the two state area, which is why he says it would be good to see them rolling into Harlem.

“It’s a real novelty people love a food truck and we love to do it for hire,” said Usry.

Harlem is working to come up with some regulations to make sure the trucks don’t affect local restaurant owners.

“We don’t want a food truck parking in front of one of our restaurants and taking up their customer spaces as well as blocking their entrances to their restaurants,” said Whitaker.

But the mayor says these regulations would not apply to a famous festival they have here.

“This will exclude the Oliver Hardee festival, they go by completely different rules,” and Whitaker also said, “Whatever festival it is, like the christmas festival and all that would fall under their festival rules.”

Again– these regulations are only in regards to people who want to have a food truck Monday through Sunday in Harlem.

This does not apply to food trucks at festivals.

The mayor says they will have more on the exact regulations in February.