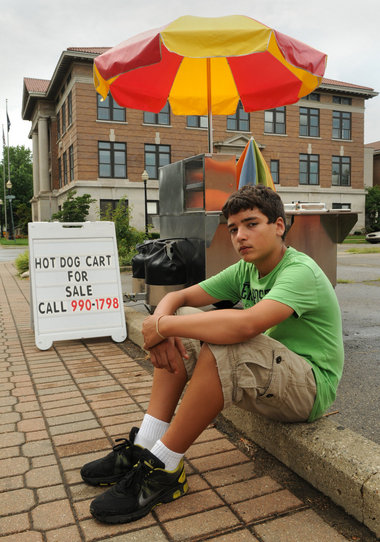 HOLLAND, MI — Nathan Duszynski is only 13, but he’s already learned more about public policy this week than many adults ever will.

On Tuesday, as the young entrepreneur was downtown setting up a hot dog cart he helped buy with $1,200 saved from mowing lawns and shoveling snow, he got an unpleasant surprise courtesy of Holland City Hall.

Duszynski was told by city officials that his cart was in violation of a Holland zoning law that protects existing food businesses downtown against competition from mobile food vendors, and he would have to cease operation immediately.

It was a shocker for Duszynski, who, along with his parents, thought he had jumped properly through all the licensing and permitting hoops with the city and county. He had been a vendor during Tulip Time and was setting up his hot dog stand on a privately owned parking lot at Reliable Sports on River Avenue.

“They specifically told us two days before that we could set up there, and gave us a license specifically for Reliable Sports,” he said.

“How hard is it to sell a hot dog?” wondered a dejected Duszynski, who has since put a For Sale sign on his hot dog cart.

Downtown Holland is abuzz today after Duszynski’s story ended up in the Holland Sentinel, sparking a flurry of inquiries by media outlets, who have latched onto the story of the 13-year-old hot dog salesman who got shut down by City Hall.

Duszynski mother, Lynette Johnson, and step-father Douglas Johnson, are upset, believing their son is showing uncommon initiative for his age and ought to be encouraged, not stopped.

But city officials say the zoning laws are in place for a good reason and claim they tried to reach out to the Johnson family before they set up this week, after an official realized there might be problems with the zoning at their location.

“This isn’t the first time this has happened,” said Holland Mayor Kurt Dykstra. “The whole idea of food carts and wagons is not something that hasn’t been discussed before. They are allowed, just not in the downtown area.”

The law Duszynski ran afoul of says mobile food vendors have to be located adjacent to, and be a part of an existing business that already has a food service license, said Phil Meyer, director of community and neighborhood services.

The law is intended to regulate existing restaurant operations in the central business district downtown, which might choose to supplement their operation with a cart or wagon. Otherwise, the only time mobile food carts, trucks or trailers are permitted downtown is during the Tulip Time festival, or if they don’t remain in one spot longer than 10 minutes. However, that mobile “peddler’s” license requires a person be at least 18.

The law dates back several decades or more, said Meyer, and was drafted at the behest of downtown businesses who pay additional assessments to cover the cost of free parking downtown, and other improvements like heated sidewalks.

“They say (food wagons) are an unfair advantage,” said Meyer, because they do not have the same taxes and fixed overhead costs as the brick-and-mortar establishments. There are a couple other places downtown that sell hot dogs.

If that reasoning sounds familiar, it‘s because the city of Grand Rapids went through a similar debate this spring over whether to amend its zoning ordinance so that food trucks could operate on private property for extended periods of time.

Grand Rapids decided in June to allow the burgeoning trend with some caveats.

In Holland, hot dog carts are permitted with special approval at events in the park, and in neighborhoods and industrial zones “although you don’t get the foot traffic there,” admitted Meyer.

Duszynski and his parents said they went into the city clerk’s office recently to inquire about permitting and were pointed to the Ottawa County Health Department, which took over permitting for restaurants and food vendors in the area this spring.

The family left believing they had all their bases covered. They were never told about the downtown Commercial-3, or C-3 zoning at the heart of the issue, they said.

They got insurance and set up a DBA. They got a permit from the county and, because Douglas Johnson is a lawyer, were confident that Duszynski’s age would not surface as an issue because the law allows children to work for a family business.

Meyer and Dykstra said the clerk they spoke to at City Hall realized after they left that the zoning might be a problem, but did not have a direct phone number. Instead, she left a message for them at Reliable Sports.

“Apparently, that message either never got conveyed or was ignored,” said Meyer.